The UESPWiki – Your source for The Elder Scrolls since 1995
< Lore: Artifacts: A
Jump to: navigation, search

The Amulet of Kings

The Amulet of Kings, also called the Amulet of the Kings of Glory,[1] was a pendant traditionally worn by the ruling emperor of Cyrodiil. In the center of the amulet was the Chim-el Adabal, also known as the Red Diamond,[2] a huge soul gem of Ayleid origin. It was held in a golden clasp surrounded by eight smaller gems that represented the Eight Divines of the original Cyrodilic pantheon, created by Queen Alessia. It served as the symbol of the divine right of the Cyrodilic emperors. The amulet was an important component of the coronation ceremony and a powerful artifact when used for divination. The soul of each reigning emperor was enshrined within the central stone, presumably during the coronation ritual involving the Dragonfires and the divine Covenant. In this way Cyrodiil's rulers were brought together in death, forming an 'oversoul' that could provide counsel to their successors.[3] The amulet could only be worn by certain individuals—those who could wear it were said to have the 'Dragon Blood' in their veins. The specific requirements, however, have been a subject of debate, and they may simply have called for the attributes of a ruler or some divine mandate.

According to legend, the Chim-el Adabal was formed when a drop of blood fell from the Heart of Lorkhan as it was flung to Tamriel, and landed down an Ayleid Well. The magicka within fused it to a strong red crystal, and the Ayleids fashioned it into a great gem.[4] It entered the annals of human history when Akatosh (in some stories Shezarr[UOL 1]) forged the Covenant with Alessia and her (symbolic) descendants while she lay in her death bed. Chim-el Adabal was fastened in an amulet and became the symbol of both the Covenant and the legitimacy of Cyrodiil's rulers.[2][5] Following the breakup of the Alessian Empire, the Amulet of Kings was lost amid chaotic civil war and its attendant looting. According to legend, a certain King Hrol tracked down the spirit of Saint Alessia, who wore the Amulet of Kings around her neck. They coupled, and a hill named Sancre Tor rose on the spot. The infant Reman Cyrodiil was found upon the crest, wearing the amulet on his brow.[6] The Amulet of Kings was restored to prominence during the Reman years, lending legitimacy to that dynasty. After that time, the Dragonfires ritual became essential to the coronation of each new Emperor. During the ritual, the new monarch was soul-linked to the Amulet of Kings and sent to the Temple of the One to light the enchanted Dragonfires, which then burned until his death.[7]

The Amulet of Kings, hidden in Sancre Tor

Interregnum and the Alliance War[edit]

In the middle of the Second Era, the Five Companions embarked on a quest to rediscover the Amulet of Kings. Their leader, Varen Aquilarios, was led to believe that the Amulet could be used in a ritual which would rekindle the Dragonfires and make him a true Dragonborn. This would allow him to be recognized as the legitimate ruler of the Empire. After years of searching, the Companions eventually found the Amulet. In 2E 579, they initiated the ritual in the Imperial City. It was then that Mannimarco, another one of the Companions, revealed his treachery and corrupted the ritual to break the ancient covenant between Akatosh and mortals. This caused the catastrophic event known as the Soulburst. In the subsequent chaos, Sai Sahan took the Amulet of Kings and fled. He then hid it within the ruins of Sancre Tor.

The Amulet was recovered from Sancre Tor in 2E 582 by the Vestige, Abnur Tharn, Sahan and Lyris Titanborn. It was later used to perform the ritual which imbued the Vestige with the power of Akatosh. However, one of the Companions had to be sacrificed in the process. With the power granted by the ritual, the Vestige was able to defeat Molag Bal and reclaim their soul.[8] After Molag Bal's defeat, Abnur Tharn took the amulet and fled to Cyrodiil. Although it was suspected he would attempt to use it, unbeknownst to him the amulet's power had been expended for at least a generation.[9]

After the long decline of the Interregnum, General Talos reputedly recovered the amulet from the tomb of the Remans beneath Sancre Tor after retaking it from the Nordic and Breton invaders.[7] 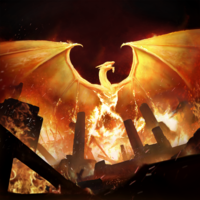 The Avatar of Akatosh summoned by Martin's shattering of the Amulet

The Champion of Cyrodiil recovered the amulet from the depths of the Imperial Subterrane after the assassination of Emperor Uriel Septim VII at the hands of Daedric cultists. The Champion then delivered it to the Grandmaster of the Blades. After escorting Martin, Uriel's illegitimate son, back to Grandmaster Jauffre, the Amulet was stolen by the Mythic Dawn. The Champion was forced to enter the Paradise of Mankar Camoran in order to recover it. This achieved, preparations were made for Martin's coronation, but the ceremony was interrupted by a Daedric assault on the capital. After fighting his way to the Temple of the One, Martin was forced to smash the amulet, this being the only way to defeat Mehrunes Dagon. The power of the intermingled blood of the Covenant summoned a rare Aedric avatar in the form of Akatosh, a fiery dragon. Dagon was defeated, but the near four thousand year history of the Amulet of Kings was ended.[10]