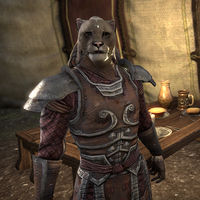 Sergeant Kamu is a Khajiit soldier and member of the Fighters Guild, who is first encountered on Stirk with the other Guild members. He was part of the initial group to enter Coldharbour and was scattered across the realm much like everyone else. Kamu quickly joined up with Captain Alphaury near the Moonless Walk but came under attack from the local residents.

Later on he takes part in the attack force and can be found in various places around the Daedric realm, such as The Orchard.

He can be spoken with in the Guild's small camp on the island where he will be excited at the chance to fight Daedra: "Once we get to Coldharbour, it'll be open season on Daedra!"

Sergeant Kamu will later be assembled with everyone else while Vanus Galerion opens the portal to Coldharbour. He will be shocked that the two guilds have decided to join forces: "The Fighters Guild and the Mages Guild working together? This one never expected to see the day!"

After following a Shadow Runner, you can find Sergeant Kamu being protected by a lamia from a pack of Shadow Walkers.

Shadow Butcher: "Give us the cat, snake, and we'll end your life quickly."
Tzik'nith: "Leave the outsider alone, warm bloods! You will not harm him!"
Sergeant Kamu: "This one knows there is an entrance to the tower somewhere nearby! Kamu … must … get … in!"

Once Kamu and the Lamia have escaped, you can find them nearby. While Kamu is injured, Tzik'nith and Faraniel will be arguing over who is the best one to protect him. You can speak with him to see how he is, and he will explain why it is so important to get into the tower.

"This one doesn't understand the game the little Elf and the snake thing are playing, but we have something important to do! We need to get into this tower. The key to our victory, it's in there! I know this to be true!"
Tell me what you're talking about.
"We heard voices in the woods. We thought it was other members of our expedition, calling to us for help. But Captain Alphaury figured it out. The voice comes from this tower.
Whoever's locked in there needs our help. And he will help us in return."

What do you know about the lamia?

"The Wood Elves started hunting us almost as soon as we stepped into this dread forest. They killed Captain Alphaury in cold blood! I barely escaped. The snake thing found this one, lost and injured, and led me safely through the woods."

King Laloriaran Dynar is a prisoner in the tower. We do need to rescue him.

"The last Ayleid king? Here? Then Captain Alphaury was right. The key to our victory is locked away in that tower!"
And why are the lamia and Faraniel arguing? (Both of the above questions will lead to this reply.)
"This one isn't sure. The little Elf appeared out of nowhere, but at least she didn't try to kill Kamu like the other Elves did.
They both claim to know how to get inside the tower, but Kamu doesn't trust either one of them."

Head for the city to the east. It's safe there. I'll investigate the tower.
"A safe haven? In this place? Kamu looks forward to seeing such a thing! Let me rest for a moment before I head out.
I wish I could go with you, but until my injuries heal I would only slow you down. Good luck, my friend."

Before he leaves, you can ask him his opinion on who you should ask for help.

Do you have any advice before you head to the city?
"This one doesn't know very much about this area, but this one always has opinions. Ask what you will and I will answer. It's the least I can do."

What do you know about the Wood Elves?
"The little Elves are ruthless killers. They call themselves the Shadow Walkers. As far as this one can tell, they hunt and kill anything that enters these dark woods.
They never even gave us a chance to beg for our lives before they killed Alphaury."

What about Faraniel?
"Kamu never saw her before. She stepped out of the shadows, but she didn't attack immediately.
It is apparent to this one that she is anxious about something. And she seems eager to help us. Perhaps too eager, if you know what Kamu means."

What do you know about the lamias?
"When we were searching the woods, we ran into a few snake things. They attacked us when we got too close. They never seemed to actively hunt us, though. And, of course, that snake thing over there helped Kamu.
I did notice something else, however."

And what was that?
"When we were resting at one of the campfires, a group of snake things rushed toward us. But they didn't attack us. They charged the Elves sneaking around our camp.
The two groups don't seem to like each other. They may even be at war."

If I decide to ask one of them for help, who would you choose?
"What a choice! Like deciding whether to roast slowly or leap right into the flames. There is no good answer.
But if we were seeking allies, Kamu would choose the Elves. They are strong and capable. They could be a great help against Molag Bal."

Not the lamias?
"Well, the friendly snake thing did help me. We shouldn't dismiss them out of hand. They lack organization and fighting skills, but Kamu can't deny their ferocity.
Perhaps they are worthy of consideration, as well."

If you speak to him again, he'll say:

"As far as I can tell, the lamias and the Wood Elves don't get along very well. Even though the snake thing saved me, I'm not sure we can trust either of them.
Still, they may be your best chance for finding a way into this tower."

Sergeant Kamu will be one of the Fighters Guild members attending the War Council in the Chapel of Light. When you talk to him, Kamu will say, "It is time to have our revenge!"

After you speak with the king, the meeting will begin.

King Laloriaran Dynar: "Attention, please! I have called you all here because the moment of destiny fast approaches."
King Laloriaran Dynar: "The Great Shackle has been destroyed, but not before a planar vortex was established. We must destroy this vortex before it sucks the very essence of Nirn into Coldharbour."
King Laloriaran Dynar: "The Fighters Guild shall deal with the Chasm's defenders, but blades have little power against magic."
Vanus Galerion: "And that's where my mages come in."
Vanus Galerion: "Out scouts report that some kind of magical fixtures block access to the path across the Chasm. Mages there already work on a way to overcome these fixtures, and we are prepared to lend our strength when the main force arrives."
Sergeant Kamu: "A sound plan. Plays to our unique strengths. But this one wonders, what if the mages can't overcome Molag Bal's magic?
Vanus Galerion: "A ridiculous question! Of course my mages can overcome this magic!"
Cadwell: "Ah, magic! The solution to all life's problems. I love magic! It's so … magical."
King Laloriaran Dynar: "I have absolute confidence in Vanus and his mages."
Gabrielle Benele: "Thank you, your lordship. But to be honest with you, I'm not feeling as confident as Vanus about this."
King Laloriaran Dynar: "We shall fight with all our strength. There is no other option. Lives will be lost, but hopefully a world will be saved."
King Laloriaran Dynar: "Know that the Chasm is only the first stage of this battle. The planar vortex abides within the very heart of the Molag Bal's lair."
Darien Gautier: "Oh, this just gets better and better!"
Gabrielle Benele: "Darien! Mind your tongue!"
King Laloriaran Dynar: "Darien only seeks to lighten a tense situation. Still, we have to try. To do nothing is to doom Tamriel to certain destruction."
Darien Gautier: "Well, when you put it that way, there are a lot of lovely ladies that need to be saved …."
Vanus Galerion: "Yes, well, be that as it may, we launch out assault on the Chasm immediately. The King needs to talk to the champion and I must discuss some final details with the mages. The rest of you have your own preparations to see to, I'm sure."

Kamu will leave with the others.

He can be met at the Orchard wayshrine. If you talk to him, Kamu will tell you about his recent experiences getting there.

"Kamu crossed the Chasm, with most-fragrant companions by his side!
This one grieves for the friends we lost today, however, and for the losses yet to come."

This Online-related article is a stub. You can help by expanding it.
Retrieved from "https://en.uesp.net/w/index.php?title=Online:Sergeant_Kamu&oldid=2079540"
Categories:
Hidden categories: