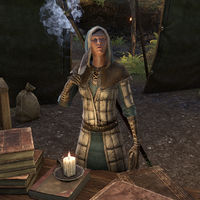 Juline Ginis is a Breton from the Mages Guild. She is first seen on Stirk as part of the invasion force. She has no dialogue on Stirk. Later, she finds herself a pawn in the games played at the Cliffs of Failure. If she is rescued, she will relocate to the Hollow City.

After agreeing to join the latest game as a wild card, you can enter the battlefield. Nearby to the entrance you will find Juline and Mim.

Mim: "This one is so sorry, Juline. I do this because I must. One of us has to make it out of here and get back to our mission."
<Mim runs off.>
Juline Ginis: "Why, my dear friend? Why have you done this?"

Juline was stabbed and you can talk with her to see if you can help.

"You … you came with us to stop Molag Bal, didn't you?
I'm sorry you got caught up in this stupid game, too. Well, take my life. Finish me. I refuse to participate in this travesty."
I'm not going to kill you. I'm here to help you.
"Really? Well, your timing is terrible. Couldn't you have shown up before we started killing each other?
I'm … sorry. It's not your fault. I'm just frustrated in myself. And a little in pain. Can you believe Mim stabbed me?"

Why did Mim stab you?

"Mim talked about a plan to get us out of this … said we just needed to play along. But as soon as we got down here, the Dark Elf fled and the cat stabbed me. Said everything would be all right.
Never trust a cat."

What task were you given?

"Angof selected me. The bastard who tried to destroy Glenumbra picks the Breton. Of all the arrogance and gall!
I guess it doesn't matter now. He gave me these strange seeds. Said they'd help if I planted them."
Strange seeds?
"Angof told me to plant the seeds in the corpses of the fallen. He seemed desperate, but there was also a kind of compassion in his eyes.
Here. Take them. I don't want them. You can perform this task. Maybe that will help us."
Stay here. I'll plant the seeds for you.

If you speak with her again she will say:

"Place the seeds on the bodies of the dead. Angof said that would help me. Keep me safe.
When they force you to make a choice in all this—and they will make you choose—I wouldn't mind an ally who doesn't, you know, want to stab me."

After you have planted the seeds and created zombies, you can return to Juline, only to find Angof is helping her. Juline will be understandably confused.

A Thorn in Your Side[edit]

If sided with Angof, Juline can be found next to him at his camp.

"You've chosen to side with us?
It was the right decision to make from a list with no good answer. Speak to Angof. You'll see."

After speaking with Angof about his plan, Juline will warn you to be careful.

"I know you helped all of the mages before you chose a side, but such generosity could return to harm you.
Be careful out there."

Once you have beaten the two champions, the Observer will call you to the entrance. Juline will be there waiting for you.

"There you are. I've been looking for you.
What in the Eight is going on? There was an awful commotion and then Angof disappeared."
I defeated the other champions.
"Really? I knew you could do it. Well, I mean, I didn't actually know you could do it, but I had a good feeling about you.
Did you see the others? Relmus? Mim?"
They were controlled by the other leaders. I freed them and they ran off.
"I have to find them! We got into this together and we're going to get out of here the same way.
Where were you rushing off to, by the way?"
The Observer told me to come collect my reward.
"Oh. The reward. I'm pretty sure you don't want any part of whatever the Observer is offering.
Just … be careful up there, you hear me? I have a bad feeling about this."

When the Observer challenges you, she will lead the other mages to assist you.

The Observer: "You have accomplished the impossible! Now for your true reward. Prepare to face … me!"
Juline Ginis: "You won't face the Observer alone. We're in this together."

During the fight, the mages will be banished and can later be found caged. The revived Observer will give you the choice to free either the mages or Angof. You can speak with Juline and Angof for their opinion. Juline will believe that Angof has more to offer to the campaign against Molag Bal.

"When you make your final decision, remember the reason we all came to this dreadful realm. You must select whoever you feel will best serve you in the battles ahead.
Whatever you decide, I know it will be the correct choice."
What do you mean?
"Angof's power is far greater than our own. You'll need someone of his caliber at your side to defeat Molag Bal.
It just makes more sense to select Angof instead of us."
You want me to just leave you here?
"Think with your mind and not your heart. Angof gives you the best chance for victory. We both know that.
I wish there was another way. I wish we could all walk out of this together. But Nirn is more important than a trio of mages."

Depending on your choice, Juline can be found near Cliffs of Failure after the Observer teleports the freed outside. If you managed to save both the mages and Angof she will be surprised.

After you speak with Angof:

"I will ensure Angof finds safe passage into the city.
And do not fear him. He can be trusted. I … I just know it."

If you only saved the mages, she will instead say.

"(?)"
(?)
"We'll head out at once. That was where we were trying to go when we got separated from the others.
I wish Angof the best. He really wasn't that bad. I think somewhere, deep inside, he remembered what it was like to be human."

After competing the quest:

Juline can be found sitting in the patio area next to the Library in the Hollow City.

"It feels good just to be able to sit by a warm fire and read again. It's been too long, really.
If anything, it's a nice distraction. Takes my mind off everything that went on back at the cliffs."

This Elder Scrolls Online-related article is a stub. You can help by expanding it.
Retrieved from "https://en.uesp.net/w/index.php?title=Online:Juline_Ginis&oldid=2285582"
Categories:
Hidden categories: