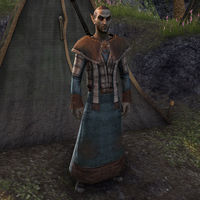 Relmus is a Dunmer who appears during several quests in the main questline and Coldharbour. He is first seen on Stirk, and eventually ends up in the Hollow City.

After being sent into the battleground, Relmus can found standing on the ledge of chasm. As you approach you may faintly hear "Can anyone assist me?" When you speak with him it quickly become clear that he what he is considering.

"I can end this nightmare … one step and it would all be over. No more worries. No more unpleasant options. I wouldn't have to hurt anyone ….
Just one single step."
Don't do anything rash. I'm here to help.
"Help? No one can help us. We're already dead. Lost. Forgotten. More playthings for Molag Bal.
We can't win this dreadful game. No one can. Why even bother trying?"
Don't give up. Remember why we came here.
"I couldn't even hold on to the one thing I needed to survive. It's useless. Either I fight for naught or I end it all here and now.
I refuse to play this game. I refuse to fight against my friends and allies. It's better this way."

You lost something? Let me help you find it.
"The shadow … the one Lady Estre gave me. She said it would protect me.
But when I refused to fight, to aid the shadow, it claimed I was unworthy. It said I wasn't fit to own such a fine shadow. And then my only chance to survive walked away."

I'll find the shadow for you.

I don't care what you do. I'm going to go help the others.
needs dialogue

After finding the shadow and retrieving the pieces of Estre's mask, Estre will be there with Relmus in tow when you return. If you speak with Relmus, his demeanor will have changed.

"Lady Estre appeared. She said I should trust her. That I'd get out of here.
I … I don't know what to believe, but her words comforted me, at least. That's something. I think I'll stick with her for now."

If you sided with Kinlady Estre, Relmus will be with her.

After you defeat the two champions, Relmus will be waiting for you at the entrance.

"That's surprising. Oh, I had complete faith in you. I really did. But no one has ever survived long enough to defeat two champions. It's unprecedented!
Did you see Juline and Mim? What happened to them?"

Once you have killed the Observer, Relmus can be found in a cage with his fellow mages and Estre in another. The newly revived Observer will make you choose between them but first will allow you to speak with Relmus and Estre.

"I'll be much better once you get us out of here. I've never liked tight, confining spaces.
You are going to select us to set free, aren't you? That is the reason why you came to the Cliffs of Failure, after all."
The Observer wants me to choose between the mages and Lady Estre.
"Of course he does. And the High Lady batted her eyes and stuck out her bossom [sic]. She does have an effect on people, I'll give her that.
But she's here for a reason. Whatever she did, she deserved this fate. We didn't. Remember that."

Depending on who you chose, Relmus can be found outside the Cliffs once the Observer teleported the freed people out. 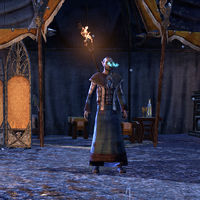 When you speak with him while he is caged, he will lament about getting banished while helping you fight the Observer.

"I should have known. What a useless gesture! Why did we even try to help you?
Look at us! Caught like rats in a cage."

If he one of those freed after you speak with the Observer, he will thank you.

"Molag Bal plays such cruel games with the people of his realm.
To put those who have failed in their life in a never ending battle, it's just, I don't want to think about it.
I'm thankful that you saved me. What now?"

"Thank you for not giving up on me back at the cliffs even though I had already given up on myself.
I was so close to just stepping off that edge …."

This Online-related article is a stub. You can help by expanding it.
Retrieved from "https://en.uesp.net/w/index.php?title=Online:Relmus&oldid=1912235"
Categories:
Hidden categories: