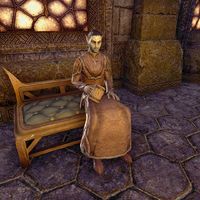 Dithis Romori is a Dunmer member of the Mages Guild who lives in Stonefalls. He is Denthis Romori's brother, and one of Valdam Andoren's pupils. He is a regular patron of The Watch House tavern in Davon's Watch.

Dithis is initially encountered in Davon's Watch after his brother stole his teacher's spellbook. Later on while exploring Stonefalls, you will come across him again, having been polymorphed into a goblin. His problems are compounded as he has been kidnapped by the Shadowsilk goblin tribe in a bid to wed him to their leader, Chieftain Grimmstal.

Later on, he will be one of the mages selected to help with portals during invasion of Coldharbour. He will be found on Stirk and later the Daedric realm itself. Unfortunately, he will be imprisoned in the Court of Contempt with several other mages, and requires you to save him.

You can find him inside The Watch House before the related quest.

"What can I do for you, stranger?"

During the quest, you'll need to speak with him.

"What can I do for you?"
I'm looking for your brother.
"Valdam sent you, didn't he? Well, my brother robbed us both. We were supposed to share its secrets, but he ran off toward the tower.
Joke's on him. I think Valdam changed the warding incantation to "Arkay's Beard."

Speaking to him again:

"Vivec take my brother! He ran off behind this building chanting "Eyes of Akatosh" over and over."

Speaking to him after finding the book, but before reverting the spell.

After the quest, he can be found back in the local tavern. If you freed his brother, he will be annoyed that his brother didn't transmogrify.

"So he didn't turn into a chicken? Too bad."

"A chicken, you say? I guess it wasn't Akatosh after all."

After the quest, if Denthis turned into a chicken:

"A chicken! Well, I'll get Valdam to undo it. Eventually." 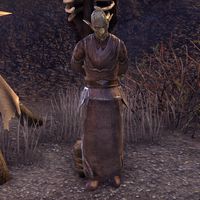 Dithis tied up in goblin form

You can find Dithis as a goblin within the Shadowsilk Goblin Camp.

"You're not with the tribe, are you? Help me!"
How did they capture you?
"Denthis was just showing me how the spell works. Then the Shadowsilk tribe jumped us. They carried me off as a tribute for Grimmstal.
Enough talk. Get me out of here!"
Let me untie you.

"I ran so fast. I'm still out of breath. Goblins are surprisingly quick when they have something to chase!"

Once the quest is completed, he will say the following when spoken to:

"I can't thank you enough for saving me from Chieftain Grimmstal. I'm going to suffer through this humiliation as long as I need to. At least I'm alive!
And stop looking at me like that, Denthis."

When he is first spoken with on Stirk, he will express the hope that the meeting will go well.

"I pray these talks go smoothly. We need to learn to work together."

If, however, you've met him in Stonefalls during A Goblin's Affection, he'll be a little more bitter.

"After getting captured by those Goblins in Stonefalls, I've had my fill of them!"

Afterwards he can be found waiting with everyone else for the portal to Coldharbour to open, and he will mention his dislike of goblins.

"There aren't any Goblins in Coldharbour, are there? I have a profound dislike of the vile creatures."

Dithis can be found locked within a cage within the Hall. If you speak with him before releasing him, he will say one of two lines.

Once he is released, he will sound indignant at the result of his trial ruling.

Dithis Romori: "I still can't believe they sentenced me to death! Of all the nerve!"

If you speak with him after releasing him, he will admit he was afraid.

After you have fought your way out and the mages have escaped, Dithis can be found with the others just outside the Court. He will have had a surprisingly good time.

"I never expected to have to do battle with Daedra! I rather enjoyed myself!"

After arriving in the Hollow City, Dithis can be found with his companions near the Library building. If you speak with him he will remark on their success in stabilizing the portals.

"It took a bit of work, but we finally stabilized the portals. Our people aren't getting scattered hither and yon every time they travel to Coldharbour any more.
At least, not as long as they're traveling to the Hollow City." 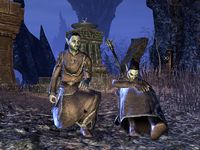 The Romori brothers at the Reaver Citadel Wayshrine

Dithis can be found at the Chasm on the side closest to the city during the attack. If you do this quest before rescuing Dithis, he'll be replaced by Gedsar Adren.

"I'm ready to face anything, even the Dremora guarding this Chasm. But Akatosh preserve me, I have a profound fear of heights."

As you fight your way through the Chasm, he and his brother will be guarding the portal on the second tier as per Gathwen's orders. If you talk with him, he will remind you of what you need to be doing. He appears here regardless of whether he's been rescued or not.

"There are two portals being used by the Dremora to transport reinforcements. You have to shut those portals down!"
Any idea where I can find these portals?
"Well, Darien ran east and Walks-in-Ash ran west, so I imagine that tells us something.
Now, stop standing around and move out! Those reinforcements are slaughtering us!"

He can be encountered with his brother on the land bridge outside the Reaver Citadel. Dithis will be feeling pessimistic.

"This looks pretty grim. We'll never find a way into that citadel. I think we should just cut our losses and head home now."

This Elder Scrolls Online-related article is a stub. You can help by expanding it.
Retrieved from "https://en.uesp.net/w/index.php?title=Online:Dithis_Romori&oldid=2289768"
Categories:
Hidden categories: