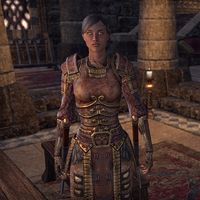 Countess Hakruba can be found with the rest of the Fighters Guild council, waiting for evidence linking to Jofnir's killer.

"Peace be upon you, comrade. Good to see you at my little meeting."
Your meeting?
"Yes, comrade. My meeting. I am the Countess Hakruba, daughter of Tigonus, flower of the sands, and Province General of High Rock.
This meeting was called at my request, as I have the honor of leading the council."
The Guildmaster doesn't lead the council?
"The Guildmaster sets the goals of the guild as a whole. The council interprets her wishes at the province level.
As head of the council I resolve disputes, and ensure we are working hand-in-gauntlet with the Guildmaster."

"The Divines be praised for your safe return."

Once Merric has been told the news:

"This is not good news."

The Weight of Three Crowns[edit]

Before heading to Stirk, Countess Hakruba can be found beside Vanus Galerion. When spoken to she will say:

"They're waiting on you. Good luck. You're going to need it." [verification needed — see talk page]

After speaking to Vanus, Countess Hakruba will address Vanus:

Countess Hakruba : "The word has been given."
Vanus Galerion : "A moment, please."

Vanus completes the portal and speaks to you as he enters:

Vanus Galerion : "I'll wait for you on the other side."

The Countess does likewise:

Countess Hakruba : "Our representative, Captain Alphaury, is in charge of security on Stirk. He assures us that all is well there, but keep your wits about you. Good luck."

Once on Stirk, she will be waiting on the dock and will direct you to Vanus first.

"I'm just here as security. You should talk to the great mage, Vanus Galerion."

Once you have spoken with Vanus, he and the Hakruba will become your followers as you walk past the guild camps to the meeting place. If she is spoken with she will say:

"The summit is just ahead. The leaders should be arriving any moment."

When you reach the Fighters Guild Camp and the man in charge of security, Captain Alphaury, Countess Hakruba will ask for a status report.

After the start and rapid breakdown of talks between the leaders. Countess Hakruba will be angered by their behavior and chains that currently constrain the Guild from invading Coldharbour.

"Intractable fools. Their pride will see us all dead."
Is the Fighters Guild any different?
"We've served as the first line of defense against Molag Bal's invaders, destroying his Dark Anchors all across Tamriel. They've succeeded in reducing their ranks and leveling half of Cyrodiil. What do you think?"
Would the Fighters Guild be willing to invade Coldharbour?
"Willing and able. But, like the Mages Guild, we are constrained by a non-interference pact.
The alliances will only tolerate our presence in their realms if we remain neutral. Unless all three alliance leaders consent to it, our hands are bound."

Once you have discussed your idea to allow the Guilds to fight in the stead of the Alliances with Vanus, she will demand you make them understand what is at stake: "Speak to them. Make them see reason!"'

After you have spoken with the leaders, she will want to know if you succeeded: "So? Did you convince them? Oh, don't tell me! Talk to Vanus!"

When you have finished speaking with Vanus, the situation will take a turn for the worse.

Caldien: "He … he has arrived! I can't …"
<Caldien crouches down in pain and Vanus runs up to them.>
Vanus Galerion: "Caldien! What's happening?"
Caldien: "Go! Get away from me! Run!" 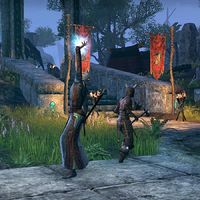 "—Who said the Guilds can't work together?"

Caldien's body begins to hovers off the ground, restrained by magic. And then a flash of light blinds you temporarily. As your vision clears, a familiar voice will begin to speak.

Molag Bal: "These are the great leaders of Tamriel? Pathetic. But how convenient to have them gathered together in one place, so I can crush them like insects."
<Countess Hakruba rushes at the projection of the Daedric Prince.>
Countess Hakruba: "Molag Bal!"
Vanus Galerion: "Stay back, Countess!"
Molag Bal: "The insects fight back! How amusing, and yet so very sad"
Molag Bal: "All of Nirn shall be mine!"

Countess Hakruba: "Protect the leaders! Defeat Molag Bal's minions and close the unstable rifts!"
Vanus Galerion: "I'll do what I can to keep any more rifts from opening, defend me!"
Countess Hakruba: "My pleasure, Vanus. Who said the Guilds can't work together?"

If you try to speak to her before closing the rifts, she'll only say:

Once the leaders have been defended and the daedric rifts destroyed you can return to Countess Hakruba and Vanus Galerion. When spoken to she will remark that the attack caught them off guard, "We were so worried about the alliance leaders fighting among themselves, we never saw this coming."

After speaking Vanus, he and Countess Hakruba will press the leaders to give their Guilds permission to fight.

Vanus Galerion: "Honored leaders! You have seen the face of our enemy!"
Vanus Galerion: "Molag Bal threatens every living being in Tamriel! The Mages Guild and the Fighters Guild have agreed to join forces to launch an assault on Coldharbour!"
Countess Hakruba: "Trust in us! Sanction our actions! Give us your blessings! We will not let you down!"
High King Emeric: "Vanus is right. The Guilds are our best and only choice. Send them to Coldharbour!"
Jorunn the Skald-King: "I hate to admit it, but I agree with Emeric."

Despite, the leaders' agreement the Countess will not let them blame the war solely on Daedric manipulations.

Within the Portal Valley, she will be waiting beside the structure where the portal to Coldharbour will be created. If you speak with her before entering, she will be amazed that you managed to get this outcome: "I don't know how you managed to pull this off, but the guilds are with you!"

This Online-related article is a stub. You can help by expanding it.
Retrieved from "https://en.uesp.net/w/index.php?title=Online:Countess_Hakruba&oldid=2079472"
Categories:
Hidden categories: