The UESPWiki – Your source for The Elder Scrolls since 1995
< Oblivion: NPCs
Jump to: navigation, search 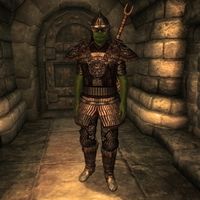 Adventurers are Orc NPCs who are found randomly in a range of ruins, forts and caves throughout Cyrodiil. They will always be named "Adventurer." They have been sent out by Gortwog to seek treasure for the glory of Orsinium. Each Adventurer will be 2 levels lower than the player, and can be a Warrior (4 in 6 chance), Spellsword or Battlemage (each 1 in 6 chance).

They are friendly to the player and are typically found sleeping, eating and searching their current location for treasure. They will attack creatures they encounter in the dungeon, and may also loot chests and pick up items they find laying around. As such, if you are coming across empty chests or can't find items that should be in the dungeon, check to see if there is an Adventurer in your location who is carrying the missing treasure.

About one time in four, an adventurer will possess something from the following list.

Players have a 25% chance of meeting an Adventurer in the following locations:

Players have a 10% chance of meeting an Adventurer in the following locations: