The UESPWiki – Your source for The Elder Scrolls since 1995
< Online: Quests: Auridon / Side Quests
Jump to: navigation, search

The town of Silsailen is under attack by imposters disguised as First Auridon Marines. The townspeople suspect these men and woman are a part of a group called the Veiled Heritance. Id=4208 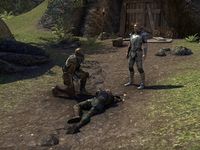 There are multiple people you can talk to who will direct you to Silsailen. If you have previously completed A Hostile Situation, you can find Watchman Cirdur with the recently dead Silsailen Defender just outside Vulkhel Guard.

"I recognize you. You were talking with Urcelmo in the courtyard earlier. I heard about what happened with Astanya … most of us aren't like that. Will you spare a moment for the true Vulkhel Watch?"
What happened here?
"This guardsman is from the village of Silsailen. They're under attack. He managed to say something about the First Auridon Marines before he succumbed to his wounds. Something about a fire, the village ablaze."
Can't you send some guards?
"With Astanya's death we're … well, we're a bit disorganized. Please, you handled the Captain so well.
Go to Silsailen, northeast of Vulkhel Guard. Find the Canonreeve or his daughter Elenwen, and help those people."
I'll check it out.

If you travel close enough to Silsailen, Ilemin will run up to you, yelling for help.

"They've burned the town! Please, please help us!"
Who set the fire?
"A group of soldiers came to town. They were dressed like the Marines, but... they set fire to the buildings! I heard someone say they were really part of the Veiled Heritance, that splinter group."
You should get clear. Who should I talk to?
"The Canonreeve's daughter, Elenwen, organized an evacuation. Last I saw, she was heading for the barn on the west side of town. Go quickly, please!"
I'll find her.

"Thank the Stars. This mudcrab won't stop pinching me.
Listen, you have to get to Silsailen! Help them before it's too late."
What's happened?
"It's the Veiled Heritance! The town is in flames! It all happened so fast.
Silsailen is just north of here. Follow the road, and find the canonreeve's daughter, Elenwen. She'll know what to do."
I'll find her and do what I can. 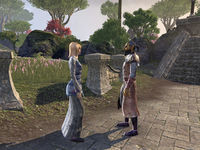 All three will send you to talk with Elenwen, she can be found on the over side of the bridge on the western outskirts of Silsailen, talking with Canonreeve Valano. Alternatively, you can start the quest by talking to Elenwen directly.

"We need to get this madness under control."
Madness?
"Can't you smell the smoke? Silsailen is under attack! I barely got my father out alive! The Canonreeve, almost slain!
These brutes may wear the uniforms of the First Auridon Marines, but they're imposters."
Who are they?
"They're agents of the Veiled Heritance. I'm sure of it! Teldur, my father's assistant, is trying to organize a defense.
You look capable. Will you help Silsailen?"
I'll find Teldur at once.

She will inform you that the town was recently attacked by fake First Auridon Marines—in truth they are Veiled Heritance—and asks that you report to her father's assistant Teldur to help with defense and rescue. 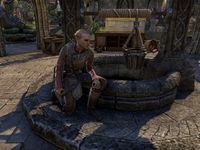 Teldur hiding near the well

Teldur can be reached by crossing the bridge and following the path to the center of the town, he will be crouched next to the well.

"Are you insane? Can't you see the town is under attack?"
Elenwen sent me to help.
"Did she? How do I know you're not one of the imposters?"
Look, do you want me to help or not?
"Fine. Grab that bucket from the well and put out the fires. If you find any villagers, tell them they need to evacuate until it's safe.
What are you waiting for? Move like you have a purpose!"
What are you going to do?
"Refuse to answer an outsider's pointless questions, for one. I'll catch up with you at the barn later. Now go!"

Interact with the nearby well to get a Bucket of Water. You now have to save five villagers within Silsailen. Despite Teldur's words, it is not necessary to douse and flames; you can find villagers around Silsailen being menaced by Heritance soldiers, kill the hostiles and the villager will be able to flee. Other villagers may be trapped in the burning buildings, in this case, use the bucket on the flames so they can escape. 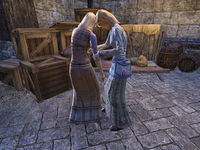 Report back to Elenwen.

Once you have rescued five villagers, you can look for Elewen, who is in the barn south of where you previously met her. She will be tending to the injured.

"The fires are under control, thanks to you."
I saved as many villagers as I could.
"We'll be a long time in rebuilding, but your bravery won't be forgotten."

You can then speak to Hanilan to find out who was behind the attack.