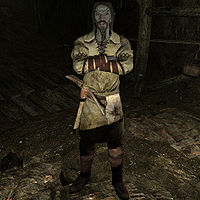 Sondas Drenim is a Dunmer food vendor and a resident of Darkwater Crossing who works as a miner at Goldenrock Mine. He's on friendly terms with his fellow miners and seems to be happy with the settlement's lakeside location. According to Hrefna, Sondas takes care of her if her mother is away.

He goes to bed early, at 9pm, only to wake up early on the following day at 4am. He will then wander around the camp for three hours, until it's time for his breakfast at 7am. After his breakfast, Sondas will start his long workday at 8am and head into the mine. The rest of his day will be spent mining, only interrupted by his final meal of the day at 5pm.

Sondas wears a set of barkeep clothes along with a pair of shoes. He wields an iron dagger and carries a pickaxe along with a selection of lower-class loot and gold.

When spoken to, Sondas will talk about general mining things, as well as his homeland:

"I try to think of it as coaxing the ore from the rock."
"I keep hearing stories about Morrowind. Sounds like a wretched place."
"I hear there's baked slaughterfish tonight."

Sondas is also willing to speak about other topics, such as the ongoing civil war, as well some general information about the settlement:

Has the war affected you?
"I'm lucky enough that none of my friends have been killed. Of course we have soldiers coming through all the time."

What can you tell me about Darkwater Crossing?
"Those falls... dangerous place. Derkeethus thought he could find some good fish in the pools. Haven't heard from him in a long while."

If asked if he's worked in the mine long, Sondas will bring up a problem:

Have you been working in the mines long?
"This mine is only a few years old, but I've been digging up ore for over a century. We're getting to the point where the tunnels are getting deep into the rock. People complain of bad coughs and foul air. I've seen this before. We need some medicines to combat the ore dust. I was about to send a message to Windhelm for aid."

I could deliver that for you.
"Thank you. Take it to Quintus, in the White Phial."

Once delivered, Quintus will reward you, but Sondas will never mention it again. However, he will become a potential candidate for marriage.

Sondas can be heard talking to Hrefna or her mother Tormir:

Hrefna: "Sondas, I've heard about Morrowind."
Sondas: "Oh? What about it?"
Hrefna: "That it was black and gross and nobody wanted to live there anymore."
Sondas: "I'll have to take your word on that one, my dear."

Hrefna: "Do you ever want to go to Morrowind, Sondas?"
Sondas: "I've been in Skyrim my whole life. Why would I want to leave?"
Hrefna: "To see the fires!"
Sondas: "I think I like the lake here just a little more."

Tormir: "Thanks for looking after Hrefna."
Sondas: "Oh, it's no trouble. She's a smart little girl. Might talk your ear off, but she's fun."
Tormir: "Well, I know she thinks the world of you."
Sondas: "Well, I'll try to be a good influence, then."

Tormir: "Sondas, does Hrefna ever mention Meieran to you?"
Sondas: "She hardly mentions anything else."
Tormir: "I'm just worried about what he's teaching her."
Sondas: "I wouldn't worry about that. He's a good elf. I trust him."
Tormir: "You're probably right."