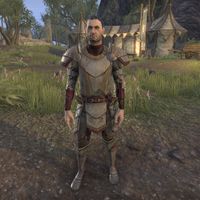 Captain Mathias Etienne is a Breton and the captain of the Wayrest City Guard. He acts as the personal bodyguard of High King Emeric during his visit to Stirk.

He can be found in the throne room of Wayrest Castle, where he greet you.

"You're new to Wayrest. Welcome. Even if you're just passing through, your safety's important to us.
If you have any troubles, you just let me know and I'll take care of it."

After a bag of Stolen Goods is brought to the captain, you will get the option to tell him about it.

I did run into some thugs. I found these stolen items on one of them.
"Again? These guys just don't get it. We'll turn a blind eye to some things, but not robbing people in the streets.
We had an understanding with the Midnight Union, but ever since their presence started weakening here, we get these upstarts."

The Midnight Union's presence is weakening?
"Yeah. I hear their leader, Hosni at-Tura's gone a little soft in the head. The Midnight Union's still here, mind you. Operation here's run by a Khajiit over at the Cloudy Dregs.
I hear he's not in very good favor with his boss these days, though."
Who are the upstarts?
"They're known as the Backstreet Gang—your basic thugs, but there's nothing basic about their leader.
Name's Ondre. They call him 'the Grinder' because he grinds up his victims. Wanted for dozens of murders.
Say, you want to do another good deed?"

What did you have in mind?
"I got this tip where to find the Grinder. His boys contact him by knocking on this drum down by the docks.
None of my guards have the guts to go after him. Frankly, neither do I. If you're willing, though, there's a reward in it."
I can do that. I'll find the gang's leader on the docks and kill him.

After you agree to hunt down Ondre, the Captain has some final advice for you.

"If you decide to go after the Grinder, just don't let him get the drop on you.
That would be the last mistake you'd ever make. Good luck out there."

Once Ondre is you can return to Mathias and receive your bounty payment.

"I heard there was a ruckus down at the docks, They say someone chewed up the Grinder and spit him out.
I'm guessing that someone was you."
Yes. I killed the leader of the Backstreet Gang.
"That's fantastic. The Backstreet Gang will scatter to the wind without the Grinder to hold them together.
You just made my job so much easier. I guess you made Wayrest safer too. Take care, friend."

If you speak with him again, he will thank you for the help and dismiss you.

"Thanks for your help with that gang of thugs.
On to the next mission! I've got to see to this guard's needs. Good day!"

"You showed great courage in Wayrest, dealing with the Midnight Union. We'll always be grateful."

However, if you are part of the other alliances he will be a lot less friendly, saying, "(?)

During the sudden Daedra attack on the leaders, the captain will be injured and out of the fight. Afterwards he can be spoken with and he will say (?)

This Online-related article is a stub. You can help by expanding it.
Retrieved from "https://en.uesp.net/w/index.php?title=Online:Captain_Mathias_Etienne&oldid=2079465"
Categories:
Hidden categories: