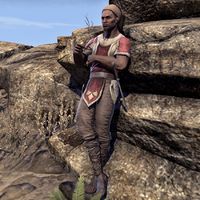 Azei at-Owynok is a Redguard guide hired by Herminius Sophus to help him on his travels across Hammerfell and High Rock. Unbeknownst to Herminius, he is far more knowledgeable about artifacts than he lets on, and watches Herminius to that he doesn't plunder the Alik'r. He is also accompanied by Latebrius, a pet monkey.

Speaking to him after accepting the quest from Herminius:

"I'm glad that the Imperial has found someone else to talk to. His haughtiness is suffocating."

The sword in question is a wondrous object, and Herminius Sophus believes it will appear to those who have a connection with death or whatever lies beyond.

What sort of connection?

"The great scholar from Cyrodiil doesn't know. Imagine that?"

Is the sword powerful?

"The magnificent scholar believes that the sword is too damaged to be used anymore, if it even exists at all."

Why does he want the sword?

"He wants to preserve it in a safe warehouse in Cyrodiil, where all the other artifacts have been taken, I imagine."

Why do you work for him?

"If not me, another would surely stand here.
My advice to you is simply to look along the shore. Others searched inland and were disappointed."

I'll do that. Thanks.

Sophus said that this sword had a sad tale.

"Yes, indeed it does. It is a story of jealousy and betrayal. Have you not heard the ballad of Navid?"

I don't believe so.

"In the early days of the Ra Gada, a powerful Ansei named Yaghoub led a vanguard of thirteen great warriors—Sword Singers all. In those days, Redguard bonds of fellowship were even stronger than they are now. These men were as brothers."

"One of the warriors, Navid, was strong but covetous. His dearest companion, Ihlqub, had met a woman named Sayeedeh whose beauty was legendary—hair like polished obsidian and eyes like darkest sapphires. Navid's jealousy grew and grew."

"Yes. Just so. While Ihlqub stood on the beach stringing his legendary bow, Navid crept up behind and thrust his sword deep into Ihlqub's back. Before Ihlqub died it is said that he looked on Navid with such sadness that Navid's heart broke in two."

"Wracked with guilt, Navid fled to his tent, took up his grandest blade, and killed himself. When Sayeedeh heard of what happened, she threw herself into the water from the highest cliff.
She was not seen again."

After you pick up the Ancient Blade from Na-Totambu's Landing and defeat the sword-cursed, Azei will run up to you and shout:

"Friend, it is Azei! I must speak with you!"

You can then talk to him again:

"Did you recover the sword? We must speak before you go further with it."

What do you mean?

"I did not expect you would find it. Only those who are... different... are capable of such a feat.
What do you intend to do with it?"

"Only those with the keenest senses can even see it, and only one without a soul should be able to take it from its resting place.
I do not know how you lifted it unless your soul... no matter. What is your intention?"

Then I'll put the sword back.

"That is wise. Sword-Singer Navid was buried at the Lion's Tomb, though he did not deserve such an honor. It was hoped the curse would fade in time, but instead the sword claims more victims.
The curse is his to bear. He must take back the blade."

I plan to give Herminius Sophus the sword.

Wait. I thought you didn't know much about this place.

"A deception. I watch Herminius Sophus so he does not plunder Alik'r. I know more than his books have explained."

Can anything break the sword's curse?

"No, it is a deep, ancient curse. There is darkness in that blade that even the Divines would struggle to banish.
Sword-Singer Navid's spirit seeks to distance himself from the blade, but he is the source of its evil. He cannot keep shedding the burden to others."

I'll return it to Sword-Singer Navid, then.

"That is for the best. Leave it at the Lion's Tomb on the shore.
Then talk to Herminius Sophus before you leave; perhaps he will abandon his foolish search."

Herminius Sophus sent me to find the sword.

I urge you to reconsider. You do him no favors by giving him this blade.\n\nYou know the curse it bears. Anyone who carries the sword will be attacked by those tortured spirits. Only the dishonored one is not so bound.
Even if Herminius Sophus escapes the vengeful spirits, he will take the sword to Cyrodiil. However cursed this sword may be, it is still a relic steeped in our history, our heritage. It must stay in the Alik'r!
You bring only misery by removing that sword, wayfarer. Make the wise choice.

When you speak to him after completing the quest:

"Death comes to us all. May we face it with honor."

Speaking to him to start the quest:

If you accepted the quest from Herminius, when close to Azei, he will yell out:

"Can anyone hear me? Help me!"

He can then be asked what happened while you free him.

"Poisoned by spiders...be careful. They are attracted to movement.
You were attacked by spiders?
"As we entered this passage, I stopped for a moment, and Herminius Sophus continued on.
Before I could turn around, a very large spider bit my leg and I fell, unable to defend myself."

Didn't Herminius Sophus come back to find you?
"There is a reason he hired a guide. I've heard him call for me, but it seemed he walked in circles and came no closer."

Will you continue to work with Herminius Sophus?
(?)

Do you think you can walk?
"I am tired, and my muscles ache, but I am otherwise in good health. Had you not come along, however, the tale would certainly be different.""

This Online-related article is a stub. You can help by expanding it.
Retrieved from "https://en.uesp.net/w/index.php?title=Online:Azei_at-Owynok&oldid=1947504"
Categories:
Hidden categories: