The UESPWiki – Your source for The Elder Scrolls since 1995
< Lore: Places: R
Jump to: navigation, search

This article is about the capital of Anequina. For for the people that live on the Rim, see Rim-Men.

Rimmen (alternatively known as Rim'kha in Ta'agra)[1] is one of the eight-major cities in the province of Elsweyr,[2] serving as the capital of the region of Anequina. Rimmen is seen as the epitome of Elsweyri hospitality. It is an oasis in the harshlands of Northern Elsweyr, as tropical plants and trees grow on artificial canals that flow from the great Anequine aqueducts.[3] The city-state is found along the Rim Territories of the province.[4] Rimmen was one of the original sixteen kingdoms of Elsweyr, known for their expert and diverse trading.[5]

Rimmen is found in the greater region of Anequina, which is known for their harsh deserts and dry savannahs.[4] However, Rimmen is found in the Rim Territories, where the grasslands are more somewhat vibrant and lively. It is a crossover from the neighboring regions of the Nibenay and Pellitine. It is built atop of a hill that descends into the High Savannah, which is the upper tier of Northern Elsweyr, anchored by Riverhold to the west. Just to the south is a large ravine where the Scar desert begins, as well as where the Rim Territories eventually leads into the Tenmar Borderlands. Outside of the city's walls are water fields on the steppes for Moon Sugarcanes and several small farmhouses.[3] Further south towards the S'rendarr's Cradle Adeptorium is the expansive Rimmen Necropolis, which despite the name, it is not a part of the city. It was supposedly created from a superstition that has fallen out of favor.[6] Like other kingdoms across Tamriel, Rimmen has its own vassal states that surround it, among these is the Lorddom of Gaer. These vassals gather in Rimmen for the Maidens Fair during the winter season.[7] Rimmen is neighbored by several settlements, including Meir Lynmount to the far west, and Valley Guard to the south.[2]

Rimmen is a large walled-off city with water canals and domed buildings built from ivory-colored stone[8]:184 and lush tropical greenery. The canals get water from the aqueducts that span across the Kingdom of Rimmen. In the city, they empty in the town square, into relaxing pools of water where several people pass the time to relax and meditate.[3] The Artisans District is found in the northwest of Rimmen. In the center is various craft stations covered by a large Khajiiti pergola. On the path to the Rimmen Palace is the Baandari Bazaar, an expansive marketplace found along the canal. Continuing north is the northern district, where the Tonenaka Shrine is found. When the Akaviri of the then-defunct Second Empire entered Anequina, they brought their culture with them, and it changed Rimmen forever. They built the Tonenaka in the traditional Akaviri style. It is described to hold ten-thousand statues crafted from sculptors across southern Tamriel.[8]:164[9] Along with the shrine, there is the Hall of the Lunar Champion, initially built for the Khajiiti Mythic-Hero, Khunzar-ri. Castle Rimmen overlooks the entire city, and it is where the King and Queen of Anequina live.

The Kingdom of Rimmen & the Akaviri[edit] 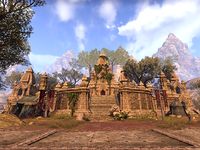 Since the Merethic Era to the late First Era, Rimmen stood as one of the original sixteen kingdoms of ancient Elsweyr, having been known for their diverse and expert trading.[5] By the time the early human settlers of the north were learning their country, mercantile caravans had thrived in what later became Rimmen.[10] But out of all of the other nations, Rimmen was one of the more prosperous, when considering its location.[11] In 1E 461, the Golden Beast of Anequina, Darloc Brae rose into prominence, descending from the Moon-Emperor of ancient Elsweyr. Darloc Brae's conquest over Northern Elsweyr garnered him control between Rimmen and Arenthia,[12][13] and his battle prowess gained the attention and respect of other contemporaries, namely Emperor Gorieus of the First Empire.[14] It is unknown where Darloc Brae himself was buried, but his loyal legion of warriors, known for their worship of Merrunz were buried in the Rimmen Necropolis.[6] However, like the rest of the sixteen kingdoms, the Kingdom of Rimmen had fallen into disrepair with the arrival of the Thrassian Plague in 1E 2260.[10][13] What was remaining of Rimmen was absorbed into the nearby Kingdom of Anequina.

During the reign of the Reman Dynasty, specifically Emperor Reman Cyrodiil II, the Kingdoms of Anequina and Pellitine were conquered by the Second Empire. In 2E 309, the two kingdoms joined together to form the Elsweyr Confederacy. Following the death of Emperor-Potentate Versidue-Shaie, the ancient city of Ne Quin-al was sacked by Khajiiti rebels, further weakening the political instability between the two kingdoms. The city of Rimmen later became Anequina's capital, to which it remains as to this day.[3][4] Sometime later when Savirien-Chorak was assassinated in 2E 431, the warlord Attrebus claimed the Ruby Throne in the Imperial City, and had decreed that any of the remaining Akaviri in the Imperial City were to be persecuted. These Akaviri refugees escaped into Elsweyr and Rimmen, where the then monarchs, King Savlian and Queen Padala offered them asylum across Anequina's outer wilderness, in the northwestern hills and the southern valleys. The refugees, who intermingled with their Imperial retainers, founded isolated settlements, including Hakoshae and became known as the "Rim-Men".[4][9]

The Usurper Queen & the Dragon Incursion[edit]

Many years later amidst the Interregnum in 2E 576, the city of Rimmen was ruled by King Hemakar and Queen Numara. As Emperor Varen Aquilarios was occupied in Cyrodiil, Euraxia Tharn was sent on Imperial business to Rimmen, where the King welcomed her kindly. This proved to be the King's greatest mistake. Using her militia of Nibenese mercenaries, Euraxia Tharn conquered Northern Elsweyr and executed the royal family. She was known as a tyrant across Anequina, from Rimmen to Riverhold. As time went on, Queen Euraxia imposed heavy and costly taxes such as the fur tax,[15] built siege weapons meant to destroy Rimmen should the people rebel, and even work with a cult of necromancers led by Zumog Phoom.[16] Euraxia's forces spanned across Northern Elsweyr, eventually taking Riverhold in the western hills.

In 2E 582, the Speaker of the Mane, Gharesh-ri joined the Northern Elsweyr Defense Force in their battle against the Usurper Queen of Rimmen. Because of the ongoing Three Banners War, the Aldmeri Dominion were pre-occupied in Cyrodiil, and so the Khajiit were on their own in the civil war. The Defense Force, under the command of Gharesh-ri and his agent, Khamira retook Riverhold and established their base there, but that was before their situation worsened.[17] Ancient Dragons returned to wreak havoc across Elsweyr when Abnur Tharn, the Overlord of Nibenay, and the Vestige released these beasts from their imprisonment in the Halls of Colossus.[18] Euraxia Tharn joined forces with the Dragons, not knowing that she was merely their puppet and giving her the false idea that she was above them.[19] Abnur Tharn and the Vestige attended a parlay with Euraxia Tharn at the Rimmen Palace, only to be rejected and inciting another assault onto Riverhold.[20] But after their failed attack, the Vestige, Abnur Tharn, and Khamira infiltrated the Rimmen Palace where they burned down their siege weapons and assassinated Queen Euraxia Tharn. The throne was empty and Hemakar's last remaining heir, Khamira proclaimed herself the Queen of Anequina.[21] From Rimmen, Queen Khamira commanded the Defense Force to end Zumog Phoom's attempt to revive Cadwell the Betrayer and the Dragon's plot to harvest the lunar energy of Jode's Core.

Rimmen in the Third Empire[edit]

Sometime later in 2E 812, the Kingdom of Rimmen cedes from the Elsweyr Confederacy, though continued to pay tribute to the Mane. The Rim-Men that lived across the province's rim territories joined the re-organized Kamali of Cyrodiil, who were remnants of the Second Akaviri Invasion in 2E 572. Before this, however, the Khajiit reclaimed the Rim from the Rim-Men in a series of bloody conflicts. The Akaviri uprising, which succeeded in taking the Ruby Throne from Attrebus' dynasty, failed in their attempts at rebuilding the Empire, thus seemingly ending the Akaviri presence across Tamriel. By the time Tiber Septim entered the fray to claim the Imperial City, the Kingdom of Rimmen returned to Elsweyr, where they paid tribute to the Mane, Nhad-hatta for protection.[4] Following his victory over Morrowind, Tiber Septim acquired the Numidium, known as the Brass-God of the Dwemer. The Emperor tested the golem in Elsweyr, across Rimmen and the Halls of Colossus, before he used it to destroy the Second Aldmeri Dominion.[22][UOL 1]

During the Imperial Simulacrum in the late Third Era, the city-state of Rimmen was an active settlement. It was ruled by King Ommed and it had a rivalry with Alabaster.[23] Several years later, the Gold-Cat of Senchal, Ya'Tirrje had an expansive drug-smuggling business across Elsweyr. His Moon Sugar operation reaches as far as Rimmen, Corinthe, and Torval.[10] As time went on, around 4E 40, Rimmen was ruled by a Potentate, known for having a vast dislike for free Khajiit clans, to the point where they were banned entirely from entering Rimmen.[8]:179 It was when the entire province was engulfed in chaos or conflict, following the assassination of the Mane.[8]:180 The Potentate of Rimmen was notably in control of the distribution of Moon-Sugar, fixing the price to their benefit and persecuting, or even executing anyone for selling it.[8]:186