The torture victims are found in the Dawnstar Dark Brotherhood Sanctuary after the torture chamber is purchased from Delvin Mallory in the quest Where You Hang Your Enemy's Head...

The four torture victims are seemingly unessential characters without a potential dialogue choice, but actually give out locations of several hidden treasures after activating their dialogues a few times. They can be used for target practice when grinding skills. By using the Ice Form shout, you can remove the torture victims from their shackles and level up your Sneak skill, though after being unshackled they will not move from their position. They will not respawn if killed. 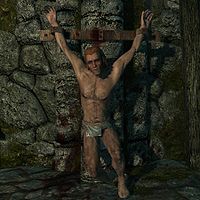 "I'll tell you anything. Anything! Just please stop... hurting me..."
"I just... can't take the pain. Not a second longer."
"I'll give you money. Treasure. I have some things hidden away. Take them all. They're yours. Just please... stop."
"Just north of Windhelm. There's a hollowed-out rock. I have some things hidden in there. Take them! They're yours."
"I've told you everything I can. I don't know what else you could want..."
"Uuggghhhh" 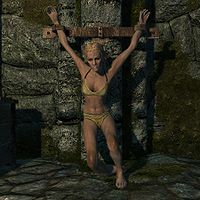 "You... you can't do this to me..."
"Do you have any idea who I am? When my father hears about this, he will gut you."
"Ah, now I understand. This is about that my father's hidden cache, isn't it? The dowry for my wedding."
"Ha! Well it's safely hidden away, in a hollowed-out tree stump. Just outside Riften, tucked away nice and secure. You'll never find it."
"Damn it. I gave it away, didn't I?"
"Uuggghhhh....." 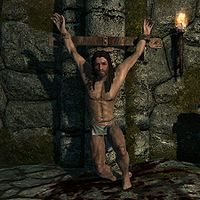 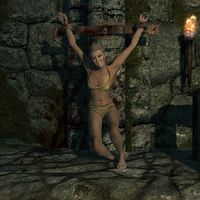 "Why are you people doing this?"
"Is it information you want?"
"This... this is about the inheritance, isn't it? All right! I'll tell you where I've hidden it."
"It's in a hollowed-out tree stump. In the marsh, south of Solitude. Now please, you'll let me go now. Right?"
"Why don't you be a dear and let me go now. All right? I won't say a word to anyone. Our little secret. I promise."
"Uuggghhhh....."