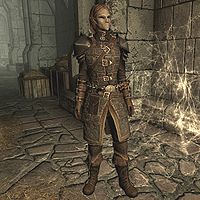 She arrives at Fort Dawnguard when you reach stage 60 of the quest Prophet. She will then join the growing team of recruits hanging out in the western area and will spend her time wandering, relaxing, eating or using the various tools in the area. On every full hour, she may decide to train her crossbow skills on the dummies in the northern cave for three hours. She sleeps on one of the cots between 8pm and 4am. During the Kindred Judgment quest, she will be in the crowd when Isran holds his speech, although she will not participate in the attack on Volkihar Keep.

She is clad in a set of Dawnguard heavy equipment. This includes the brown cuirass, as well as matching pairs of gauntlets and boots. She is equipped with a Dawnguard war axe and a crossbow supplemented with fifteen steel bolts.

If you are an elf, she will say:

"Not a lot of our kind here, I see. Suppose I shouldn't be surprised. Still, those of us here have as much of an obligation to protect Skyrim as any other, wouldn't you agree?"

If you are not an elf, she will instead say:

"Seems that I'm the only of my kind here. Suppose I shouldn't be surprised. Still, it's my duty to help protect Skyrim as much as any Nord's, don't you think?"

You can also ask her why she joined the Dawnguard:

Why did you join the Dawnguard?
"Isran is the only one trying to do something about these vampires. I don't much like him, but I can't allow the people of Skyrim to be preyed upon by those monsters."