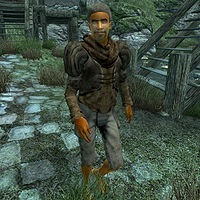 Relan is a Redguard mage that lives in the town of Fellmoor. He appears to be the town hunter and seems to be almost obsessed with killing vermin. He expresses the desire to have animal fangs with which to eat the vermin.

Although he claims to be quite the hunter, Relan never leaves his blood-soaked house (due to a bug) and can be found wandering on the ground floor every day between noon and midnight. Ignoring the flies buzzing around the body parts in the corner, he then sits down and eats a nightly meal until 3am. At that time he pulls out his iron shortsword and hacks away into the thin air for practice. He keeps going until 8am when he finally heads upstairs and goes to bed for four hours of sleep.

His wardrobe is a mixture of Shivering Isles and Cyrodiil items, a patchwork shirt with matching pants and braided leather sandals. Along with his iron shortsword, he carries his house key and a small amount of gold.

When you meet Relan for the first time, he will look at you and say: "Smells of prey...." If you talk to him, he will reveal his utter madness: "Relan. It is I who kills. It is I who hunts. It is I who keeps the fields and farms clean for Cindanwe. Clean of vermin. Clean of the things and people who would take our crops and eat them with their nasty nasty teeth. I wish I had more teeth -- great big fangs on my arms and legs to eat them before they eat us." On subsequent meetings he will say: "Soft flesh... brittle bones... snap snap... Love how they crack." On his settlement of choice he will answer briefly: "It's nice here. Lots of pests for Relan. Lots of blood."When asked about bossy Cindanwe: "Cindanwe think she tough lady. Not as mean as Relan. She okay. She let Relan kill things that need to be dead. Relan like biting off heads." On the female Khajiit living next door, Kishashi, Relan will observe: "She a liar. Say she kill Minotaur with spoon. Ha. Ranarr-Jo, he trust nobody. Except he trust this liar. Why? They strange. Not good neighbors." When asked about Ranarr-Jo he will reflect on his paranoia: "Always he look over his shoulder. Maybe I twist his head all the way around for him. Make it easier to see behind him. Hahahaha." On Cindanwe's Notebook he will laugh: "Haha! Cindanwe lose her head looking for that. Show to Ranarr-Jo. He hate Cindanwe. He think she keep our secrets in it. Look. Look! It nothing but gibberish. My neighbors, they weird. Now, I must go bite something's head off. Bye."

Notwithstanding his vermin-hunting obsession, he is praised by Cindanwe as Fellmoor's only useful resident: "Relan is the only one around here worth a damn. And that's only because he loves to kill his pests." She does however blame him for the disappearance of her notebook: "That's a private thing. Besides, someone stole it. Relan needs to step up security around here."

At different stages in the Main Quest, Relan will share different rumors with you and other NPCs: