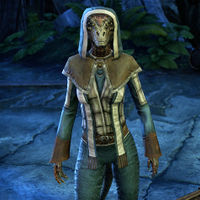 Speaks-With-Lights is an Argonian member of the Mages Guild. She can be found near Elden Hollow I contemplating how to stop Canonreeve Oraneth from completing her ritual. While you are inside the Elden Hollow, she and her colleagues, Bakkhara and Dracien Montue will teleport in to deal with the altars and the ritual itself.

She will later return to the Hollow to help Kargand's expedition though she believes it to be ill-advised.

When Canonreeve Oraneth is defeated the mages will come into the room and observe the shadowy portal the ritual created:

Bakkhara: "So. Oraneth sold her soul completely. The Thalmor will not be happy with this."
Speaks-With-Lights: "Bakkhara, look! Just as you feared—the ritual is complete. See how the darkness gathers?"
Bakkhara: "Yes. Whatever Oraneth unleashed here may be even stronger than she. Prepare yourselves." [They attempt to close the portal. Something else happens instead.]
Dracien Montue: "What in Oblivion was that?"
Bakkhara: "Everybody out! Oraneth would undo us all!" [The shadow starts to spread.]
Speaks-With-Lights: "Mistress Bakkhara, what are you doing? We must go!"
Bakkhara: "No, you must go! Warn the Guild. Warn Tamriel! Quickly now—Bakkhara can't hold this forever."

Speaks-With-Lights will create a portal so you can get away before the darkness pulls you in like Dracien Montue. When you are back at the entrance, she can be spoken to complete Ancient Remains.

"Thank the Egg. You made it out too. I think Dracien's gone."
What happened back there?
"You felt the rumblings. Saw the darkness pouring from the ground. You tell me what that was.
All I know is Bakkhara gave her life to save us from it. Don't waste her sacrifice."

She can be spoken to again where she says she needs to warn the Guild.

"I'll get topside and alert the Mages Guild as soon as I catch my breath. Xuth, something awful is coming …."
What just happened?
"I only know that the darkness was not the result of necromancy, though I won't risk going back to investigate further.
I will heed Bakkhara's last request. The Mages Guild must be warned."

When you re-enter the Elden Hollow after the previous events, Speaks-With-Lights can be found going through boxes in the first chamber from the entrance.

"So you've returned! I thank you again for your help in the Hollow. Dracien and Bakkhara are lost, but I am pleased we remain to tell their stories."
What are you doing?
"Looking for supplies. The members of the Mages Guild below will need all the aid I can muster.
We've sent an expedition into the Hollow, unwise as that may be."
What do you mean?
"A vast darkness blankets Elden Hollow. It is dark magic unleashed by the death of Canonreeve Oraneth, a rogue Thalmor politician.
The Hollow is unsafe to traverse, though Kargand, our leader, insists we explore it."
I'd like to go down there.
"You're insane to want to go down there. Go speak to Kargand if you won't change your mind. He's led the rest of the Mages Guild contingent into the Hollow.
You'll find nothing here but darkness and creatures born of it."

The quest is then begun, your topic of conversation will depend on whether you previously completed Elden Hollow I.

I was able to help before.
"You were indeed a fierce wind in battle against Oraneth, and your offer to help is appreciated. I am glad that, though we lost Bakkhara, we did not lose you.
Still, I believe you are courting a dangerous beast by returning here."
We don't know that Bakkhara and Dracien are truly lost.
"You saw the all-devouring darkness that burst from Oraneth's altar. It swallowed Dracien and Bakkhara whole.
Our leader disagrees, but I know one does not return from magic like that. If you insist on going, you should speak to Kargand below."

If this is the first time you have come to the Hollow, you can ask her what happened previously:

What happened before?
"We heard rumors that the Canonreeve was rallying her Thalmor guards for a venture into the Hollow.
We feared she would use the Hollow as a site to cast powerful magic. We were right."
Who is Canonreeve Oraneth?
"She is dead.
She was a member of the Thalmor, displeased with the Dominion's performance in the war. The Mages Guild believed she came here to release a power that could turn the tide. All she has done is compromise this Hollow."
What do you mean? Did she succeed?
"We of the Mages Guild came down here to stop her. We defeated her in battle, but failed to counter the spell she cast, and a great darkness burst forth.
Bakkhara, our leader, sacrificed herself so that I could escape."
Is Bakkhara dead?
"We do not know, and it is for her sake that this expedition was launched.
Bakkhara's brother is a fellow mage, and leader of this search party. If she can be found, Kargand intends to find her."
So, Kargand is inside?
"Yes. He took many mages with him, and he would probably take you, if you asked. He will do anything to get his sister back.
I caution you again—you court a dangerous beast by entering the Hollow."

This Online-related article is a stub. You can help by expanding it.
Retrieved from "https://en.uesp.net/w/index.php?title=Online:Speaks-With-Lights&oldid=1992008"
Categories:
Hidden categories: