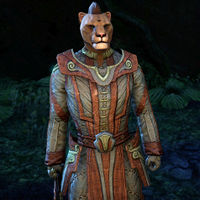 Warlock Kargand is a Khajiit mage found in Elden Hollow after the Thalmor traitors have been cleared out. He is the head of an expedition into the Hollow to investigate the shadowy magic phenomena which caused the disappearances of his sister, Bakkhara and Dracien Montue, following the completion of Canonreeve Oraneth's ritual.

Unfortunately, the ruins have become overrun with Daedra and Kargand will need some help.

When you first find him, he will be surrounded by the bodies of his fellow mages, an injured Corynne will be beside him:

"Who are you?"
Speaks-With-Lights sent me. What happened here?
"Daedra happened. The Hollow is infested with them. Turns out that muskarse Oraneth was summoning them down here, to fight a war for her. Turned out well, no?
My Mages are slaughtered. And still, Kargand must find his sister, Bakkhara. Will you help?"
How can I help?
"Defeat the Daedra. Your claws look sharp enough.
This one would search to the last plane of Oblivion before giving up on his sister. If Bakkhara lives, we will find her. Will you help?"
I will.

He will then become your follower, and you can lead him through the tunnels. You can ask him some more questions:

"We need to get moving. This one knows his sister is alive."

How can you be so sure?

"This one and Bakkhara are very close. She has been there for me always and always will be. This one will stop at nothing to find her and will let no one stand in my way … friend or foe."

"I have done all I can for the Apprentice. Whether she lives or dies is up to her, now. The time I have to spare, I save for my sister, Bakkhara.
Let us go."

While fighting through the Daedra, Kargand will make comments:

Kagand: "Leave it to an Altmer to grasp for power and sow disaster. I would have been able to keep these Daedra under control.
If these shaveskins have harmed my sister, I will unclaw them."

In the first cave he will begin to track her by scent:

Kargand: "This one knew she was alive! Bakkhara is close, I have her scent. This will be easier than I thought.
Perhaps I can save my sister and return home with a cadre of Daedric servants, as well."

As you continue on, it be clear that Kargand has some ideas for these Daedra:

Kargand: "Look at all these Daedra. They would be a force to be reckoned with under the banner of the Mages Guild …."

After defeating Dubroze the Infestor at the site of the first altar:

Kargand: "My sister's scent ends here, at this portal. The altar that keeps it open must just be beyond. You stay here."

He will then approach the shadowy portal the Daedroth appeared out of and jump into it. Dark Root will emerge and the portal will then disappear. Once you find another portal to the shadowy daedric realm, you can begin to search for Kagrand and Bakkhara. After you have found Bakkhara, you will eventually find Kagrand near the final portal hidden in the daedric realm and will need to defeat Bogdan the Nightflame to free him.

Once Bogdan is slain, Kargand will call out to his sister:

She will then create a portal and Bakkhara will lead Kargand through it. If you speak with him before leaving the realm:

Upon returning to the Hollow from Nightflame's realm, his behavior will be disconcerting:

"I see noises … have you seen them? They glow pink and sharpen swords in the moonlight with a caterpillar with fangs."
Kargand? Is something wrong?
"Yes? What happened? Where am I?"
Bakkhara and I freed you from a Daedric realm.
"And you have made a dire enemy for it.
This one was a wonderful prize. Full of arrogance and hubris. He thought he could succeed where Canonreeve Oraneth failed. One is dead. The other belongs to me, now."
[Intimidate]Set Kargand free, or there will be consequences.

"You are an amusing creature. You think to threaten this one?
The Khajiit's mind will never be his again. Not fully. And this one will remember you. One day soon, this one will open you and devour your yolk."

[Persuade] Kargand has done nothing to you. Set him free.

"You are amusing to make demands.
The Khajiit's mind will never be his again. Not fully. And this one will remember you. One day soon, this one will open you and devour your yolk."

If you suggested that Bakkhara spare Kargand, if you talk with him, he will appear to be grateful only for it to go wrong:

"I'll get better, I swear."
Kargand? Is something wrong?

The rest of his dialogue is a repeat from above, where Bogdan reveals himself to you.

If you decided that it is too dangerous to keep him alive, Bakkhara will kill him herself:

If he was spared, he can be found at the Mages Guild in Elden Root with his sister. He still hears Bogdan but hasn't succumbed:

"This one thinks he is doing better. The voices still speak to Kargand but this Khajiit can ignore them."

This Online-related article is a stub. You can help by expanding it.
Retrieved from "https://en.uesp.net/w/index.php?title=Online:Kargand&oldid=2095112"
Categories:
Hidden categories: