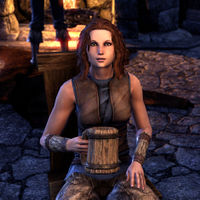 Ferocious Jakidi is a Nord outlaw who can be found at the Withered Tree in Riften. While she isn't a member of the Undaunted, she is one of their drinking buddies. She is sitting at a table with Gobur One-Eye and Kailstig the Axe.

Jakidi is also a former member of Captain Blackheart's crew, and will tell you about Blackheart Haven, adding it to your map if you have not discovered it yet.

If you're not part of the Undaunted:

"I'm in no mood. Leave before I finish my ale or you'll wish you had.
My drunk arm is a stiff arm, I assure you."

If you are with the Undaunted:

"This ale's not as good as the grog from the time I ran with Blackheart's crew. But it does its job."
You're a pirate?
"Was a pirate. I don't mingle with the Captain any longer.
The Captain's … changed a bit. Not for the better."
What do you do now?
"Whatever it takes to get by. Listen—you're an Undaunted, aren't you? I can tell—your colleagues here had their eyes on you soon as you came in.
If you haven't run into Captain Blackheart yet—don't go looking."
Why not?
"He's rich, and there's plenty to take if you've got a quick hand—but I'll be blunt.
He'll kill you. The Captain hates the adventuring sort. Especially near his property."
How do I find Captain Blackheart?
"Are you hard of hearing? I just ….
Never mind. You lot are impossible. His hideout is called Blackheart Haven—you'll need a boat to get there. Shouldn't have trouble finding one around Bangkorai. You didn't hear it from me, though. Got that?"