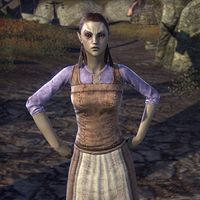 When you arrive near the entrance of Selfora, you will find Elynisi on the ground, injured. Speak with her.

"Turn back, traveler. There was an explosion and now Selfora is overrun. I was injured trying to get to the inn."
Are you all right?
"I don't know what happened. The elders were gathered in the center of town.
Then there was a flash and suddenly spirits were everywhere."

If you exit conversation and speak with her again:

"Turn back, traveler. There was an explosion and now Selfora is overrun. I was injured trying to get to the inn."
Explosion? Overrun? What happened here?

"So many people died! But they remain here, as angry and vengeful spirits."
Can you move?
"I think so, but probably not far. I need to go to the inn. That's where survivors were gathering."
I can get you there. Follow me.

Speaking to her again as she follows you:

"Lead on. The inn is in the northeast part of town."

When you arrive at the inn, the survivors will be glad to see Elynisi.

Meldras Aren: "Elynisi? Thank the Three you made it! We feared the worst. Have you brought help?"
Elynisi Arthalen: "It was a close call. I'd be dead if not for this traveler's assistance."
Meldras Aren: "You've chosen a bad time to visit Selfora, stranger. Spirits roam the streets and unquenchable fire consumes the town. Selfora is lost."
Elynisi Arthalen: "Don't be too hasty, Meldras. Our new friend is powerful. I've seen what the traveler can do."

Speaking with Elynisi at the inn:

"I never thought I'd be so happy to get back in this inn."
Will you be safe here?
"I think so, at least for the moment. But we're worried there are other survivors still outside.
There's a temple on the hill overlooking the town. We're hoping that others have found sanctuary there."
No one's gone to find out?
"We're no match for ghosts. I barely survived skirting the edge of town. None of us would make it there."
You want me to go up there?
"Yes. I saw how you handle yourself. I know you can make it."
How do I get to the temple?
"It's on the other side of the bridge. There's a staircase to the south of here, but I can't tell you if the path is safe or not."

Returning to her after saving her family:

'My mother and brother are safe, and I have you to thank. Praise the Three they survived."
I had some help. A forlorn spirit told me where to find them.
"So not every spirit in Selfora is filled with hate? Then I am thankful to it that my mother and brother are still alive."
Is there anyone else missing?
"My father, Tidyn Arthalen. No one has seen him since the catastrophe struck. Was he at the temple?'
I didn't see him.
"Maybe he went to the town hall. It's usually locked. Here, take this key.
Please, he might be hiding there. He might be injured!"

After the Echo of Vox is defeated:

"We heard a commotion outside. What happened? Did you find my father?"
Selfora is safe now, but I have some bad news.
"Oh no, is it about father? He's dead, isn't he? No! Tell me he's all right. Please!"
He wouldn't submit to Magistrix Vox. Hs spirit helped me save Selfora.
"He never abandoned his principles. My father was a stubborn but good man."
He wanted you to know he loves you.
"Oh father ... he was the best man I've ever known.
What will we do without him?"
Your father wants you to carry on.
"Carry on? Oh, father ... we'll try. But we'll miss him so.
At least we know what happened. Thanks for freeing us from this horror."

If you approach her once the town is safe, she tries to be optimistic.

This Online-related article is a stub. You can help by expanding it.
Retrieved from "https://en.uesp.net/w/index.php?title=Online:Elynisi_Arthalen&oldid=2120144"
Categories:
Hidden categories: