The UESPWiki – Your source for The Elder Scrolls since 1995
< Morrowind: Places: Tombs
Jump to: navigation, search 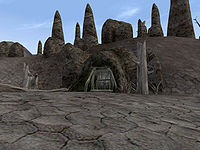 Urshilaku Burial Caverns is a burial site some way to the south and a little to the east from the Urshilaku Camp.

These are the ancient burial grounds of the Urshilaku Ashlanders, dating back to when Vvardenfell was first settled by the Chimer.

The entrance is labeled "Urshilaku, Astral Burial" after the first of the seven caverns therein. The Caverns are significantly larger than most of the tombs scattered throughout the island and, as usual, filled with Undead. There is also a significant amount of loot, probably more than can be carried in one load.

The caves themselves are split into seven sections:

Urshilaku, Astral Burial is the entrance section and fairly straightforward - a long corridor containing leveled Skeletons and Rats, with a door at the end leading to the next section.

Urshilaku, Karma Burial is the second section. A short corridor leads to a large water-filled chamber, both populated by skeletons. In a chamber off to the left is the door to the next area.

Urshilaku, Laterus Burial is a very high chamber a with very narrow stone bridge spiraling up past four separate exits to various burial chambers. A central pillar houses several mummies, and several more are dotted around alcoves at the very top of the chamber. Many of these mummies are holding some pretty good loot in their hands, but levitation or fancy footwork may be needed to get most of it. Close to the top on a hidden ledge is a very powerfully enchanted staff, reachable only by Levitation. Around the base spiral are Mummies holding: the light full helm "Demon Helm", the skill book The Four Suitors of Benitah (Restoration) and the Glass 2H Sword "Magebane".

Urshilaku, Fragile Burial is the first door you get to when following the stone paths up from the bottom of Laterus. In front of you are two pillars with skeletons on top--don't worry, there's nothing to obtain on those ledges. To the left is an Ancestor Ghost guarding the book "Feyfolken Book One", which increases the Enchant skill. You can read this by jumping and clicking, if you want to spare the levitation. To the right of the entrance are two Skeleton Champions and another Ancestor Ghosts. Directly ahead of the entrance, underneath the water, is a door leading to a third room guarded by the unique Worm Lord, who, in addition to casting powerful magic, can also summon a Skeleton to defend him. He wields a 3-7 poison damage Silver Spear and guards an Ebony Full Helm, valued at a few thousand gold, as well as the skill book Mystery of Talara Part 4 (Illusion +1). The key to his tomb is on a plateau with a mummy, in the southwestern cave.

Urshilaku, Kefka Burial is entered through the second door upwards on the paths. A skeleton will ambush you as soon as you enter. Past him is a room of two skeletons, followed by another room of 3 skeletons up the ramp. Be careful that you don't bite off more than you chew. A short distance in front of the entrance is a pool of water on the right, at the bottom of which lies a Dreugh Cuirass. Further ahead, in the room with the three skeletons, are two Daedric darts lying around the left set of totems.

Urshilaku, Kakuna Burial is reached from the third door up. You will need levitation or a good Acrobatics skill to reach a pile of large urns and mummies on pillars, where most of the loot is (including a locked chest). One Skeleton Champion is found on the ground level, while two are above the main path on a plateau. They can jump down from above, so be careful if you aren't prepared to fight two skeletons simultaneously. A Devil Cephalopod helm--among other alchemy ingredients--can be found behind the waterfall on a ledge in the back of this burial area. Levitation will be needed to reach the ledge.

Urshilaku, Juno Burial is the topmost chamber accessible from Laterus. In it are several skeletons to fight, a couple of potions, weapons and other mundane items lying around, including a journeyman's hammer. At the end of the cavern, you meet Wraith of Sul-Senipul, the ghost of the father of Clan leader Sul-Matuul, who has the Bonebiter Bow of Sul-Senipul which you need for the Main Quest. Don't leave without it.