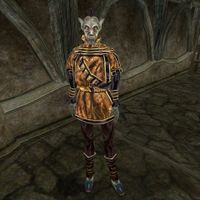 Meril Hlaano, a Dunmer noble, is a Retainer for House Hlaalu. Meril Hlaano can be found at Eight Plates in Balmora.

He wears an extravagant shirt with matching shoes and some common pants with a matching ring. He carries an iron longsword and up to 30 drakes. Aside from his natural resistance to fire and the sanctuary provided by his ancestors, he knows the following spells: Energy Leech, Righteousness, Vitality, Blood Gift, Powerwell, Balyna's Efficacious Balm, Balyna's Perfect Balm, Balyna's Soothing Balm, Regenerate, Strong Heal Companion, Veloth's Benison, Veloth's Gift, Heal Companion, and Mother's Kiss.

"I am a noble of House Hlaalu and have no business to discuss with you." (Disposition must be at least 30)

"My family is quite important here in Balmora, now if you'll excuse me..."

"House Redoran's in trouble. Hlaalu's got all the ebony trade, Telvanni are grabbing land right and left. I hear Bolvyn Venim is sleeping with Fathasa Llethri, and Garisa won't do anything about it. A Redoran in Vivec refused to show up for a duel the other day. House Redoran isn't what it used to be, that's for sure." (Before you begin the related quest)

"Make me."
"Don't make me mad, %PCName, or I'll say what I think of you, too." (Disposition must be at least 50)
"Okay, okay. I, Meril Hlaano, withdraw the statements I made against House Redoran. There. I said it. Happy?" (Disposition must be at least 75)
"I said I was sorry already. Just leave me alone." (After Meril agrees to withdraw his statement)