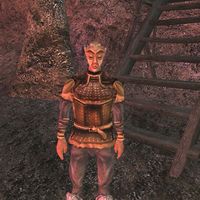 Dangor is a Bosmer archer and the main miner in charge of the Elith-Pal ebony mine in the Ashlands region, near Red Mountain. He is expecting a shipment of flin from the Fighters Guild to keep morale and productivity up in the mine.

Dangor wears a common shirt with matching pants, an Imperial studded leather cuirass, and Imperial steel boots. He also carries a miner's pick and a spare pair of common shoes. Aside from his natural resistance to disease, and the ability to command animals, he knows no spells.

"Are you here to deliver the flin?"

"Are you here to deliver the flin?"

Yes.: "Thanks, %PCName. I've been looking forward to this shipment."
No.: "Then why did you come all this way with all that flin? Are you feeling okay?"

"Thanks for the flin, %PCName."