The UESPWiki – Your source for The Elder Scrolls since 1995
< Morrowind: Alchemy / Items: Ingredients
Jump to: navigation, search 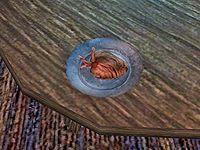 "A daedra's heart must be removed during the brief period of its appearance on the mortal plane. The daedra's heart has modest magical properties, but, since removing the heart is generally fatal to the specimen, the substance is rare and expensive."

Daedra's Hearts are found on the bodies of Daedra, except for Atronachs, Scamps, and Winged Twilights. You can also harvest them from summoned Dremora.

There is a special variety of Daedra's Heart, ID: ingred_cursed_daedras_heart_01, which can be found in many Daedric Shrines. Beware though, because these are cursed, and will cause a Dremora Lord to appear behind you and attack when you pick them up.

Three other unique hearts are added by the Bloodmoon expansion. While they are not in any way associated with Daedra, they are identical in appearance and effects while their weights and values vary. They are all needed for various quests, and so should not be used for alchemical purposes. They are:

You will need to offer four Daedra's Hearts to Malacath during the Malacath of the House of Troubles quest for the Tribunal Temple.

For a safer (but more expensive) way to stock up, the following vendors carry restocking supplies: