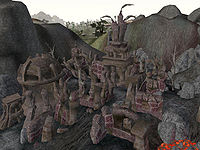 Bal Ur is a shrine to Molag Bal north of Suran, situated on the banks of Nabia River.

The statue of Molag Bal

Three Nords guard the empty upper portion. Hidden behind a door to the side, a tunnel leads to the underground shrine of Molag Bal. A bonelord, a golden saint, and a dremora or daedroth will try to impede your progress.

If you come as a vampire looking for answers, the witch Derar Hlervu will tell you to talk to the statue of Molag Bal. The god has a "minor" task for the weary creature of the night before you receive the vampirism cure.

A Tribunal Temple quest also requires you to activate Molag Bal's statue in one of Saryoni's Pilgrimages of the Four Corners.

The offerings include a glass helm, glass halberd, a daedra's heart, and some jewels on the altar.

In the statue room, if you levitate directly upwards, there is a platform that hides a chest and two urns, one of which holds several spell scrolls. 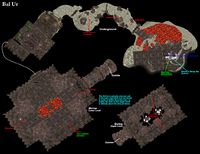 Map of Bal Ur
Retrieved from "https://en.uesp.net/w/index.php?title=Morrowind:Bal_Ur&oldid=2204390"
Categories:
Hidden categories: