The UESPWiki – Your source for The Elder Scrolls since 1995
< Lore: Artifacts: S
Jump to: navigation, search

This article is about various magical stones. For the book, see The Standing Stones.

Throughout the wilderness of Tamriel lie various types of standing stones, stones of power which are often attuned to the heavens. The origins of these stones are a mystery for the most part, but they have been known to grant great power to those deemed worthy enough.

All-Maker Stones are a type of standing stone found on Solstheim. They were created by the All-Maker, and maintain the balance of nature on the island. There are six stones: Beast, Earth, Sun, Tree, Water, and Wind. The Skaal keep the stones free of corruption to empower their nature magic. The Stones themselves can grant powerful blessings. In 4E 201, Miraak attempted to harness the power of the Stones to free himself from Apocrypha, but the Last Dragonborn used the power of the thu'um to cleanse them. 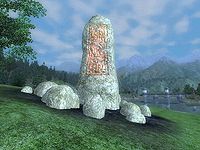 Doomstones (or Doom Stones) are a type of runestone found throughout Cyrodiil. They are marked by red glowing runes, and often surrounded by crude stone circles. Each Doomstone is attuned to a specific celestial object, such as the major constellations (Birthsign Doomstones), as well as other astronomical bodies such as the moons, the Void, Aetherius, Magnus, and Akatosh (Heavenly Doomstones).[1] The Doomstones grant great power to doom-driven heroes of significant renown, but appear inert to common mortals. As such, their apparent magical nature was of great interest to the Mages Guild. It is commonly believed by scholars that the Doomstones were sites of ancient sky-worshipping cults of beastfolk before the ages of man.[2] 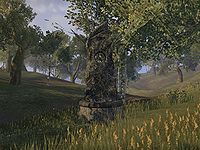 Mundus Stones are a common type of standing stone found throughout Tamriel. They are attuned with the thirteen birthsigns, and grant powerful blessings. The magical resonance of the stones comes from strong Aetherial currents, which flow directly from Aetherius through the stars and radiate outwards to form a continental web. The origins or purpose of these stones are unknown,[3] although it has been speculated that they were erected by ancient star-worshipping Nedes who imbued them with nirncrux to attune them with the power of the stars. With sufficient skill, sapphires can be integrated into pieces of clothing and armor; these items are then blessed by the Eight Divines, and can increase the power gained from a Mundus Stone when worn. 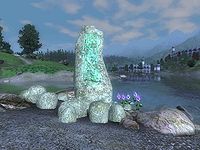 Runestones (or Rune Stones) are a type of standing stone found throughout Cyrodiil. They are marked by green glowing runes. There are four types of Runestones: Hestra Runestones, Reman Runestones, Sidri-Ashak Runestones, and Fort Runestones. The former three are named after Empress Hestra, Emperor Reman, and Potentate Sidri-Ashak respectively. Fort Runestones are found in ancient Imperial ruins such as Sancre Tor. Doomstones are also considered a type of Runestone. It is theorised that the Runestones are related to Lorkhan and date from the Dawn Era, but competing theories say they originated in the Merethic Era or early First Era. In any case, it is believed that they were then moved to their current positions by the First and Second Empires to serve as magical beacons. This is supported by the fact that all three Emperors associated with the Runestones were involved with improving Cyrodiil's roads.[1] The Runestones grant bound Daedric weapons and armor to doom-driven heroes, but appear inert to common mortals. As such, their apparent magical nature was of great interest to the Mages Guild. 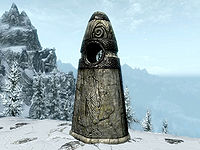 Standing Stones can be found throughout Skyrim and in Northern Cyrodiil. They are attuned with the thirteen birthsigns, and grant powerful blessings. The three Guardian Stones are found together, while the others are scattered throughout the province. They are well-known to the Nords of Skyrim and legends speak of them allowing heroes of old to rewrite their fate.[4] Aetherium can be used to harness the power of the stones.[5] The stones can also be used to create powerful scrolls due to them emitting large amounts of magicka, enhancing the scrolls' powers.[6]