The UESPWiki – Your source for The Elder Scrolls since 1995
< Lore: Artifacts: S
Jump to: navigation, search 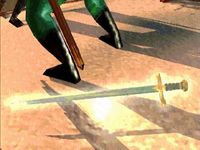 The Soul Sword is a shimmering longsword imbued with the soul of Prince A'tor following his death in 2E 864. Aside from being a powerful weapon, the sword can move of its own accord and allows A'tor's spirit to communicate with the wielder.[1]

During the Battle of Hunding Bay off the coast of Stros M'Kai, A'tor was hit with a poison arrow by the Dunmer assassin Dram, allegedly using the Bow of Shadows.[2] Archmage Voa attempted to heal him, but instead was only able to trap his soul in a soul gem and preserve his body under a stasis field before the dragon Nafaalilargus killed everyone onboard the ship.

A'tor's surviving supporters formed a rebel group named the Restless League on Stros M'Kai following the ensuing Imperial occupation. The League planned to resurrect A'tor, whose body was being hidden in the temple of Arkay in Port Hunding.[3] Iszara, a member of the League who was close to the prince, grew frustrated with the League's lack of action and attempted to go through with the resurrection herself. She made contact with the Sload necromancer N'Gasta, who promptly betrayed her, stealing the soul gem and selling Iszara's soul to Clavicus Vile.[1]

Seeking to curry favor with the island's new ruler, Provisional Governor Amiel Richton, N'Gasta had A'tor's soul gem delivered to the palace, ironically by Iszara's brother Cyrus. It was then placed in the palace treasure vaults, to be guarded by Nafaalilargus. Cyrus later rescued Iszara from her fate and killed the dragon to retrieve the soul gem for the rebels. With the help of a Yokudan witch named Saban, the League then attempted to resurrect A'tor. Instead, his soul entered the sword he was buried with, seemingly as a symbol of his intention to take up arms against the Imperials. Cyrus took up the sword and gave a speech to the disheartened rebels, inspiring them to capture the port while Cyrus went after Governor Richton.

Through the sword, A'tor opened a secret entrance into the palace. Cyrus fought his way to Richton, who was attempting to escape on a Dwemer airship. Cyrus disarmed Richton, but was outsmarted and forced to surrender when Dram came up behind him. After dropping the sword however, Cyrus revealed that A'tor had not truly been killed, prompting the sword to slay both Richton and Dram of its own accord and allowing Cyrus to escape.

Following the successful rebellion, the Soul Sword was given to Iszara. Through it, A'tor advised her to open dialogue with Emperor Tiber Septim, which led to the signing of the First Treaty of Stros M'Kai. She subsequently remained on Stros M'Kai as ruler.[1]