The UESPWiki – Your source for The Elder Scrolls since 1995
< Tribunal: People
Jump to: navigation, search 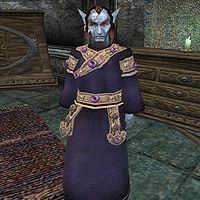 Alvan Llarys is a Dunmer noble who is looking after Golena Sadri in the Sadri Manor ever since she started acting violently towards people. This eventually leads to Alvan getting caught up in The Thief quest.

"I think you should speak with Golena Sadri before I say anything. It.... well, it will be clearer to you that way." Goodbye.

Once you have spoken with Sadri:

"I'm sorry you had to see that. She's been like this for months now, and no one can seem to get through to her. We have no idea what "it" is, or why she's become so paranoid about it. Any attempts to discuss the matter with her have ended badly. Some even violently. That's why we bring a guard with us when we visit. As a friend of the family, I can't just leave her to her own devices. I've heard, however, that she was seen talking to Elbert Nermarc recently. Perhaps he might know more."

When you return from speaking to Nermarc:

"%PCName! You've got to do something! I stepped out for a bit of fresh air, only to hear the door lock behind me! There was some horrible screaming a few minutes ago, but it's gone all quiet now, and no one has answered when I've pounded on the door. We've got to get in there!"
"Have you any news, %PCName?"

"He's the enchanter working over at the Craftsmen's Hall. I have no idea what business she would have with him, but if she's been making the effort to visit him, then perhaps he may have some insight as to her condition. Could you go talk to him, %PCName, and ask him about Golena Sadri? I'd go myself, but I feel that I really should remain here to comfort her."
"Have you spoken with him? I'd like to know as much as possible about what's going on."
"He's dead? Well, then I don't know what to think. We'll have to try and deal with this on our own, I suppose."

"I don't understand what's happened. Tadera and I have taken care of her since her parents died, and she was fine for a long time. Over the last few months, though..."
"If only we understood what was going on in her head. I hope that Elbert Nermarc can shed some light on the subject."

If you murder Sadri before going to speak with Nermarc:

"You killed her? What were you thinking? She was sick, but she didn't deserve that! Get away from me, you animal!" Goodbye. (Disposition down by 40)

When you return from speaking to Nermarc:

"I can't imagine what must be going on in there! We've got to get in there and make sure she's not hurt!"

After you confront Sadri in the sewers:

"Oh, dear. Poor Tadera... Poor Golena! If only there were something more we could've done for her. But I understand, %PCName. You had no choice but to defend yourself. You did the right thing. She was too detatched [sic] from reality to recognize you. Or probably anyone, for that matter. Don't feel guilty."
"It's just terrible. Such a tragedy. I know that no one is to blame, but I feel so responsible. I only hope she's able to rest now."