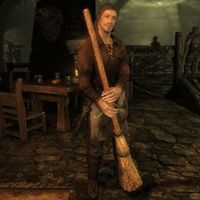 Vekel the Man is the Nord food vendor and bartender at the Ragged Flagon, which he owns. He has 100 barter gold and sells cheap food and ingredients. Although you can't fence him any stolen goods, as long as you're part of the Thieves Guild he doesn't mind if you steal objects from the tavern. He is in a relationship with Tonilia but is frustrated both by her engagement refusals and the rumors of an affair she allegedly has with Brynjolf.

Vekel will always be found offering his services in the Ragged Flagon while he waits behind the counter, gives it a scrub, or sweeps the floor. He wears some common barkeep clothes and shoes. He also carries a belted tunic and a leveled potion of restore health, magicka or stamina, as well as the odd trinket or two. He is armed with a leveled dagger and war axe (both up to elven quality).

Indeed, he isn't the friendliest of characters when greeting you:

"You better have coin to pay for your drinks. There's no handouts here."
"Got a lot of nerve coming down here. People tend to get hurt in the Ratway."
"I wouldn't stay here long if I were you."
"There's a reason the city guard doesn't come down here you know."
"Don't make trouble or else I'll ask Dirge to 'walk' you out."

If you join the guild, his attitude won't exactly improve and he'll even start complaining of the guild's sorry state of affairs:

"So, you're Brynjolf's new protege, eh? Don't look like much to me."
"Something has to change soon or I may as well pack this place up and leave it for the skeevers."
"Less coin in everyone's pocket means less coin in mine."
"I hear even the simple jobs are becoming difficult. It never used to be like this."
"It's been a long time since anyone joined us. Seems like people are in a rush to leave."
"It's one thing to say you've got the skills to be a thief. It's another to actually use them."

If you get kicked out of the guild, he'll refuse to talk to you: "I'll serve you after you've paid Vex."

If you ask him for work, he'll tell you about some journals he's been looking for: "Now that you mention it, there is. I have a buyer with, shall we say, a very odd taste in literature looking for some particular books. I'm told they're the ravings of a madman... a wizard named Arondil and his peculiar cravings. It's said to be spread across four volumes and very hard to come by. My client is offering quite a reward for them, which I'd split with you."

If you inquire as to the journals' existence, he'll reveal: "Recently, a woman was found... naked and shivering along the road to Dawnstar. The only information the guard could get from her were tales of strange experiments and Arondil scribbling in his journals." Asking about the man himself won't net you much: "Only rumors. He used to have a home in Dawnstar until they burned it down. The people say he was doing unspeakable experiments on reanimation... rituals only a necromancer would perform. After he made for Yngvild, he was never heard from again."

Should you agree, he'll be pleased: "Then we have a deal. In his later years, Andoril [sic] moved into some ice caves known as Yngvild. He prefered [sic] the solitude in which to perform his, um... experiments." If you tell him you're not interested in books he'll scoff: "Yeah, but you're into gold. Let me know if you change your mind. I'm not going anywhere." If you already have all the volumes he'll be astounded: "I can't believe it. You have them already? Here, take this. This should cover your end of the work nicely." Finally, if you only have some of the journals he'll spur you on: "It's a good start, but you need all four of the volumes or the set isn't complete. Why don't you head back out to Yngvild and find the rest?"

Once you return, he'll reward you with a leveled enchanted one-handed weapon: "Good. I was hoping you hadn't forgotten about it. As promised, here's your payment for bringing them to me. Got it as part of a fair trade from my client."

During the quest A Cornered Rat, Vekel may help with gathering information on Esbern. If you ask him about an old man he'll reply in four different ways, depending on whether you're part of the guild, whether you're friends with him, and whether you've already learned Esbern's location:

If you don't manage to get the information straight from him you can try to bride, persuade, or intimidate him:

"Well... when you put it that way, I think I do know the old guy you're talking about." or "Big talk for someone with a light purse."
"Maybe I'm just getting soft in my old age, but I actually believe you." or "That's a touching story. Now get outta my face."
"There's no need for that. Not like he's a friend of mine or anything. Just calm down." or "You've got a lot of nerve. But not a lot of common sense."

If you press him to tell you who else is looking for Esbern he'll confide: "Dangerous-looking elves who didn't give their names. Draw your own conclusions."

At different stages in the Thieves Guild questline, Vekel will deliver the following lines when talked to: