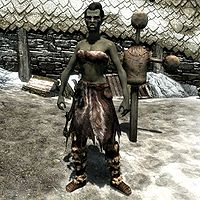 Urog is an Orc ranger living in Narzulbur, the Orc stronghold of Eastmarch. She is the daughter of the tribe's chieftain, Mauhulakh, and sister to Dushnamub. Yatul and Bolar are her great-aunts.

She can be found using a training dummy to practice her axe skills from 7am to 7pm, right in front of the stronghold's longhouse. After that, she heads inside to eat until midnight, after which she heads to bed.

Urog is content to spend her days training to be a stronger hunter with the help of Yatul, she's very impressed by her teacher and will say "Yatul's been teaching me to hunt. I'm still learning, but she's the best teacher I could have." While her brother has caught on to the schemes of his great-aunts, Urog has not and dismisses his attempts to persuade her otherwise. "My brother keeps trying to spin these fantasies on me about our aunts and our father. He's crazy." She has started to resent her father as well. His sitting around all day, depressed over his dead wives, makes her question his strength. "Sometimes I wonder if my aunts are right about my father -- he does seem weak."

Urog can be seen engaging in conversations with both her aunt, Yatul, and her father:

Yatul: "Come, child, I will tell you how to track a snow cat."
Urog: "But you said that was impossible."
Yatul: "No, just very difficult. You have to look for shift in various shades of white."
Urog: "My eyes are sharp."
Yatul: "They are, but your mind has to be sharp, too."

Urog: "What's the most dangerous beast you've ever killed?"
Yatul: "Oh, probably a troll."
Urog: "They're fearsome!"
Yatul: "They are indeed. Nothing like your mother, though!"
Urog: "That's what everyone keeps saying. But you didn't kill her. That's what I was asking."
Yatul: "Oh of course. My mistake."

Urog: "What about my father? Was he a good hunter?"
Yatul: "Oh, you've seen your father just trying to chase a skeever from his house. He's a bit soft."
Urog: "Sometimes I'm surprised he's still the chief."
Yatul: "We all are, my dear, but sometimes the Divines reward those who don't seem to deserve it. Call it dumb luck."

Mauhulakh: "How is your hunting with Yatul?"
Urog: "We are strong. We get the job done."
Mauhulakh: "I'm proud of you for helping provide for us."
Urog: "Well someone has to provide around here."
Mauhulakh: "What is that supposed to mean?"
Urog: "Nothing."

Mauhulakh: "I don't know what your aunts told you, but..."
Urog: "They're not my aunts. They're your aunts. And they told me enough."
Mauhulakh: "What are you talking about?"
Urog: "About how the Divines cursed you. What horrible thing did you do to deserve it?"
Mauhulakh: "Nothing! I... it's ill fortune. That's all."
Urog: "Well, your ill fortune means I have no mother."
Mauhulakh: "I... I'm sorry."

Mauhulakh: "Haven't I always been a good father? A good chief?"
Urog: "Yatul and I do all the hunting. Mul and Gadba do all the mining. It seems like all you do is find more wives to get killed."
Mauhulakh: "That's not fair, now."
Urog: "Just... try and keep out of our way."