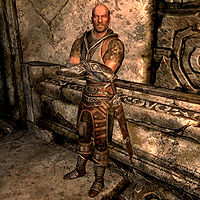 Thongvor Silver-Blood is a Nord warrior and a member of The Treasury House owned by the Silver-Blood clan; he is often seen roaming around Understone Keep in Markarth.

When first entering Understone Keep, Thongvor is seen arguing with Brother Verulus, demanding to see his deceased ancestors, but being denied entry to the Hall of the Dead due to unusual reasons, inevitably leading to him accusing Verulus of being an Imperial supporter. Upon talking to Thongvor, he quickly demands the player to answer whether or not they are loyal to the Empire or supportive of the Stormcloak rebellion. Regardless of the answer, Thongvor will reveal that he is a strong Stormcloak supporter by telling you that the Imperials have no place being in Markarth and angrily exclaims that Jarl Igmund is a puppet to the Imperial government. He even explains that had it not been for Ulfric Stormcloak and his Thu'um, Markarth would have still been under the control of the Forsworn, prior to settlement.

If the Stormcloaks take the Reach, Thongvor will replace Igmund as Jarl. When Markarth is under his control, unlike Jarl Igmund, who uses caution when dealing with the Forsworn, Thongvor reveals that his intention as Jarl is to violently suppress and enslave the rebelling dissidents by sending them to Cidhna Mine as reparation for the rebellion. If the Empire retakes the Reach later, Thongvor will spend the rest of the game at the Palace of the Kings in Windhelm.

In a cut part of the Imperial Legion questline, there was going to be a siege of Markarth in the event that you had lost the city in either a battle or as a result of Season Unending. This siege would play out almost exactly the same way that the Stormcloak variation of the Battle for Whiterun does in the main game. Upon reaching the throne room, you would be greeted to this exchange (note that this is the same dialogue that would play between Maul and Jarl Maven Black-Briar if you were taking the city of Riften back for the Stormcloaks under the same circumstances):

Once the ensuing battle had ended, this exchange would play (Again, this is the same dialogue that would play if you were taking the city of Riften back for the Stormcloaks under the same circumstances):

If you were taking the city for the Stormcloaks however, the battle would conclude with this exchange between Igmund, Thongvor, and Galmar:

This Skyrim-related article is a stub. You can help by expanding it.
Retrieved from "https://en.uesp.net/w/index.php?title=Skyrim:Thongvor_Silver-Blood&oldid=1738359"
Categories:
Hidden categories: