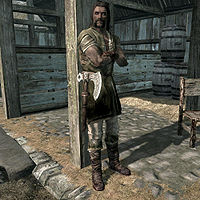 Skulvar Sable-Hilt, a Nord warrior, is the hostler who runs the stables outside the city of Whiterun. He lives there with his son Jervar and will sell you a horse for 1000 gold.

Skulvar dedicates much of his time to maintaining the stables and serving any potential customers. He wakes up at 8am and immediately leaves the stables building to head outside. He will head to the horses' stable and will stand around in this area or sit down in a nearby chair, awaiting any potential buyers. He will stay outside for the next twelve hours, until he heads back inside the stables building at 8pm. After a long day of running the stables, he will relax inside the building for the next four hours until he heads to bed at midnight.

He wears farm clothes, gloves, and boots. He carries a key to the stables as well as a selection of common items and gold. He wields an iron war axe.

When you approach him, he will not hesitate to promote his business, saying, "Got the fleetest steeds in all o' Skyrim.", "Gal/Man like you needs a warhorse, I reckon.", "Only thing better than ridin' a swift horse is ridin' a swift horse over the enemy." or "Lookin' to shatter records or bones? My beasts can do both." When asked about the age of his horses, he will say: "None of 'em's older than nine, and the youngest is six. Now, the horse I got for sale is seven years old, but in fine health. She's got a lot of spirit, that one. We've taken to calling her Queen Alfsigr, or just Allie for short. I expect you can name her anything you like once she's yours." If you just exit conversation without buying anything he will say, "Ride strong." If you buy a horse from him, he will bid you farewell with, "You always keep us in mind when you need a fresh horse, yeah?"

He can often be seen talking to his son about the family business:

Skulvar: "I tell you? Saw that wild mare again yesterday, just outside the walls."
Jervar: "Yeah. So?"
Skulvar: "So? So? Shor's beard, boy! You forget where you're standing? What kind o' business we're running? We manage to break that mare and bring her back here, we can sell her for a small fortune."
Jervar: "Oh. Okay. So we should try to... what? Capture it?"
Skulvar: "Yes, son. We should try to capture it."

Jervar: "Listen, father. I've been thinking...."
Skulvar: "Here it comes again. Not happy with a roof and a trade, no. You want to be something entirely... different."
Jervar: "I'm just no good at this. You said it yourself. Gods, I don't even like horses. And if it's true what they're saying about dragons..."
Skulvar: "Dragons? You want to go out and fight dragons? Are you completely off your nut?"
Jervar: "Come on, father, how hard can it be? They're just... big lizards. And those scales and teeth, they must be worth a fortune..."
Skulvar: "Big lizards? By Shor, your mother gave birth to a half-wit. That is the end of this discussion."

He can also be seen talking to his employer, Lillith Maiden-Loom, about the increase in business due to the civil war:

Lillith: "Everyone is [sic] this city is so on edge. I could use some good news, Skulvar."
Skulvar: "Ha! Four more geldings sold. Sound like good news to you?"
Lillith: "Indeed. I do hate to admit it, but if nothing else, all the fighting lately has been a complete blessing to this business."
Skulvar: "Aye, that it has. Trust me, mum - once you've killed a man from a horse, you'll never want to fight on the ground again. Ain't no goin' back."
Lillith: "Why thank you for that most colorful assessment, Skulvar. So we'll be needing fresh horses, then?"
Skulvar: "Aye, mum. That we will. Mares, stallions, donkeys - I don't think it matters. Pretty sure I can sell any steeds we get."
Lillith: "Excellent. I'll send the proper letters, then, and have some fresh horses delivered straightaway."
Skulvar: "Lookin' forward to it."

Uthgerd: "By Ysmir, it's true. A jester - funny suit and all. Just north, by the Loreius Farm. Fool had a coffin in a cart, with a broken wheel. Like to see him laugh his way out [sic] that."
Skulvar: "Well, sounds like you've had quite the journey, Uthgerd. But you were gone longer than usual. I got to thinking maybe you weren't coming back..."
Uthgerd: "You sound like my ma. Figured I was lying dead in a field somewhere, is that it?".
Skulvar: "Thought did cross my mind, yeah. War brewing, talk of a riot in Helgen, and now jesters? Skyrim's gone mad, girl. You need to be careful out there."
Uthgerd: "Careful, huh? Thanks, Skulvar. I'll remember that. Ha ha ha ha ha ha!"