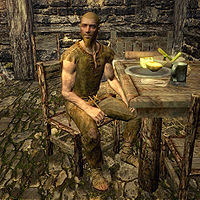 Molgrom Twice-Killed is a Nord thief and a former member of the Thieves Guild. He is currently doing time in the Riften Jail as a punishment from Brynjolf who disapproved of his methods. He wears only a roughspun tunic and a pair of footwraps.

Twice-Killed is a self-given name despite the fact that he hasn't even been killed once. He started using the title after a night out a few years ago when he was trying to get Vex drunk at the Ragged Flagon. He was stabbed after telling someone who was making too much racket to keep it down, but Vex saved him.

When approached, Molgrom will be dismissive of you, saying things like:

He will only be available for dialogue if you are a member of the Thieves Guild, in which case he will instead greet you with complaints:

"Brynjolf sent you to rub it in?"
"Waste of talent throwing me in here, right?"
"Can't wait to get out of here."

When spoken to directly he can be asked questions about himself:

Twice-Killed?
"Got into a scrap a few years ago at the Ragged Flagon. Some idiot who stole himself a guard's sword and kept boasting about it. He's making too much racket and I'm trying to get Vex drunk. So I tell him to keep it down and he just runs me through."
And you lived?
"Yeah, I was lucky though. After Vex tore the guy to pieces, she gave me a potion. If she hadn't of [sic] been there... Anyway, after I got back to the Guild, I decided to start calling myself Twice-Killed."
But you weren't killed... Not even once.
"Yeah, but Twice-Killed has more of a ring to it!"

Why are you in prison?
"Because big, bad Brynjolf doesn't like the way I play thief. Look, he says we needed coin, so I got coin. Who cares if people got hurt? Blood washes off septims. Now I'm sitting in here counting skeever droppings while he's drinking Black-Briar mead with Maven."
So prison is a Guild punishment?
"Hey, if you're in good with Maven you've pretty much got it made. She's got friends in high places, and I don't just mean in Skyrim. So getting the guards to throw me in here as a 'punishment' was about as easy as falling off a log."

Upon exiting dialogue, he can say: