The UESPWiki – Your source for The Elder Scrolls since 1995
< Skyrim: People(Redirected from Skyrim:Liesl (Dragonborn))
Jump to: navigation, search 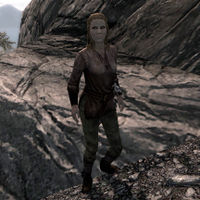 Liesl is a Nord sailor found at the Water Stone in Solstheim.

Initially from Windhelm, Liesl, along with fellow sailors Hjalfar, Benkum, and Palevius Lex, decided to cast anchor along the western coast of Solstheim and immediately fell prey to Miraak's spell. She works continually at the stone, oblivious to the world around her. Once the stone has been cleansed, the entire crew will return to their boat on the coast. When you leave the area, they will all disappear from the game.

Liesl wears miner's clothes with a pair of boots, and carries a steel sword.

She shares her dialogue lines with her fellow sailors: