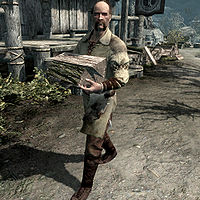 Leontius Salvius is an Imperial under the employ of Eydis at the Old Hroldan Inn. His parents are Rogatus and Vigdis at the Salvius Farm. Leontius will sleep between midnight and 7am in the inn. He will spend the rest of the day working outside. He normally does not provide any services, but should Eydis pass away he'll take over as publican at the inn. As publican he is actually quite personable, but lacks the historical spin that Eydis puts on a stay at Old Hroldan.

He is wearing barkeep clothes and a pair of shoes, he wields an iron dagger, and carries the key to the inn and some lower-class items and gold.

While Eydis is alive, he may tell you about the inn, saying, "I work for Eydis. She runs the inn." or "You should head on inside. Eydis or Skuli can take care of you." If Eydis has died, he will tell you, "Skuli owns the inn with his mother gone, but I handle the rooms." or "The Old Hroldan Inn is still open, bless poor Eydis's memory." During the quest Rogatus's Letter, you will be able to deliver his father's letter, to which he will reply, "What's this? I guess some things never change. Thanks for bringing this to me. Here, for your trouble." and he will hand you some gold.