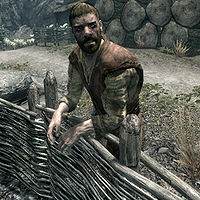 Hjorunn is a Nord lumberjack and operator of the Solitude Sawmill. He lives in the neighboring house and watches over his small potato farm and the mill with his employee, Kharag gro-Shurkul. He will pay you 5 gold per piece of wood.

Hjorunn wears farm clothes and boots. He also carries two keys: one to his room, and the other to the sawmill (see bugs). Hjorunn wields an iron war axe in combat.

When he sees you, he may say, "Come in, come in! I was just about to take a break." He will occasionally comment on his way of life, saying, "Living outside the walls is a risk, aye. But at least the guards don't come nosin' around." He will also tell of what trouble the civil war has brought him, "We had some trouble, while back. Stormcloak tried to set the mill on fire. But we sorted her out."

Occasionally he will converse with Kharag:

Hjorunn: "Kharag, take a break and drink with me! Those trees aren't going anywhere!" OR "Why so glum, my ugly friend? Did we run out of mead?"
Kharag: "I have to work twice as hard because you drink up all our profits." OR "Can you pay attention to work for once, instead of your mug?"
Hjorunn: "What did you say? I ought to break off one of those tusks and use it as my drinking horn!" OR "Don't make me to defend the honor of my mead! It's been my friend a lot longer than you have!"
Kharag: "Hjorunn, the last time you tried anything, your fist broke on my head!" OR "Just as long as you don't breathe on me, Hjorunn. I'll be out for hours."
Hjorunn: "Guess we can't afford to miss that much work, can we? Oh well..." OR "True enough, you cur. Back to work, I suppose..."