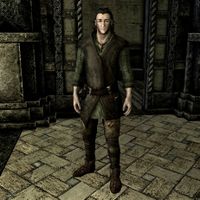 Gissur is a Nord beggar and an informant of the Thalmor. He can be overheard arguing with Rulindil in the Thalmor Embassy during Diplomatic Immunity. If he is not slain during the infiltration of the embassy, you will later meet him in the Ratway Vaults during the quest A Cornered Rat.

Gissur wears a set of farm clothes and a pair of boots, and wields a leveled dagger (up to elven quality at level 20). He carries a huge amount of items, including two leveled poisons of damage health, and one leveled poison of damage stamina. He will always carry a leveled gem, with an additional 25% chance of another gem, some regular food, some prepared food, and has a 75% chance of carrying up to three randomly chosen beverages. Lastly, he carries a spare belted tunic and a small amount of gold. If encountered during your search for Esbern, he also carries a note, on which is a description of his target and the instructions to inform his assigned contact if he spots you.

You will encounter Gissur for the first time during your infiltration of the Thalmor Embassy, specifically inside Elenwen's Solar, where you will overhear him and Thalmor interrogator Rulindil talking about the imprisoned Etienne Rarnis.

Gissur: "But, I need that money! I earned it. I have my own expenses you know..."
Rulindil: "Silence! Do not presume, Gissur. You are most useful, but do not presume. We have other informants who are less... offensive."
Gissur: "But no one else has brought you such valuable information, have they? Etienne, he's talked, hasn't he? He knows where that old man is you're looking for, he told me himself."
Rulindil: "You'll get the rest of your money when we confirm his story. As agreed."
Gissur: "So he has talked! I knew it!"
Rulindil: "Everyone talks, in the end. Now, I have work to do. Leave me to it, if you ever want to see the rest of your payment."
Gissur: "Can I... I could help you. He'd talk to me. He trusts me."
Rulindil: "You'd like to come downstairs with me, is that it, Gissur? Shall we loose his bonds and put you in a cell together? You can ask him anything you like, and see how he answers."
Gissur: "No, no. I'll... I'll wait outside."
Rulindil: "That would probably be best. Now get out!"

Gissur will then obey orders and leave the Solar, muttering to himself as he goes. "He can't treat me like that. He needs me.", "Rulindil, pah! One day, the shoe will be on the other foot.", "I knew he was telling the truth. I always can tell.", "They're scared of the dragons, too, aren't they? Paying too well. They don't know anything." and "Etienne must know something related to the dragons... who else might know? Greasy Thom... no, they'd see right through him..." At this point, he will be hostile and attack you on sight. Should you, however, manage to talk to him by using a Pacify spell, he will brush you off with, "You must be new. We don't talk to each other here." He was supposed to have two other random responses but due to a minor bug, these will never be spoken at all. He will wait in the courtyard as ordered, and will never enter the Solar again. 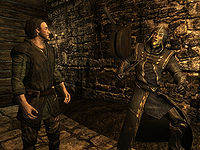 Gissur and the Thalmor in the Ratway

If he survives the events at the Thalmor Embassy, and the quest A Cornered Rat has been initiated, Gissur can be found seated at a table in the Ragged Flagon, trying his best to blend in and listening to all conversations that take place there. When approached, Gissur will once again brush you off, saying: "Leave me alone", "I've got nothing to say to you", or "I'm not looking for a conversation." However, once you have questioned the regulars about the old man and are told to search the Ratway Warrens, Gissur will leave his table and walk back to the Ratway where he will meet up with two Thalmor soldiers and a Thalmor wizard. He will then tell them what he heard:

Gissur: "He's/She's in the Flagon right now. Get ready."
Thalmor: "You're sure?"
Gissur: "Of course I'm sure! He/She was asking about Esbern."
Thalmor: "Doesn't matter. We'll kill them either way."

The group of Thalmor will patiently wait until you have uncovered Esbern, and will typically attack you in either the Ragged Flagon (where the regulars will come to your aid), or the Ratway. If you have advanced far enough in the Thieves Guild questline and take the shortcut through the Cistern, Gissur and the Thalmor will instead attack you on the streets of Riften, so be careful of unwanted casualties. In either case, you will have to take Gissur down, along with his Thalmor friends.