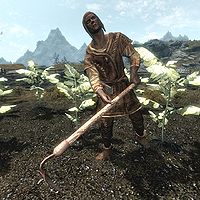 Ennis is a Redguard farmer who can be found at the Cowflop Farmhouse in Rorikstead. He shares his home with Reldith, the Altmer with whom he has lived since she rescued him after he was orphaned. His prize goat is stolen by you and sold to a giant during the related quest.

He wears a belted tunic, a pair of boots, and a hat. He carries an iron war axe, an iron dagger, and a key to the farmhouse.

Ennis starts his day at 8am when he wakes up to work on his farm for twelve hours, ending his workday at 8pm. The only break from his work during the day is at 6:10pm, when he will take an hour to eat. Once he is finished with his work for the day, he will head inside his home to relax from the day's stresses. He will finally retire to his bed for the day at 11pm; waking up at 8am to start the next day.

If you speak to Ennis before A Night To Remember he will introduce himself by saying, "Name's Ennis. If you've got friends who do business in Whiterun, they might know me." With further prodding he will provide comments about Reldith, and his business dealings with Whiterun: "You talk to Reldith yet? She's like a mother to me." "You here from the city? I visit Whiterun from time to time, mostly to make deals." "Reldith is the hardest-working farmer in Rorikstead, but I'm the one with a head for business."

During A Night To Remember, he will be less friendly towards you. Should you approach him, he will force you into a conversation by saying, "You! You've got a lot of nerve showing yourself in this town again. What do you have to say for yourself?" You will be given two options in response:

"Sorry's not good enough! Not while my Gleda is still out there, alone and afraid. You kidnapped her and sold her to that Giant."

"I have no idea what you're talking about."

"Is that so? Does the name Gleda ring a bell? The star beauty of my farm? Kidnapped by a drunk lout and sold to a Giant? You'd better remember her right fast, before I call the guards and have you hauled away."

Your only dialogue option in response is to comment that what happened sounds pretty bad. Ennis will then demand that you retrieve the goat: "You're damned right it does. I'll never breed another prize-winning goat like Gleda! And don't you think of coming back to Rorikstead until you get her back from that Giant." You will then have a number of dialogue options, which will result in unique replies:

After returning the goat to Ennis, you can ask him for help in retracing your steps. With Gleda home, he will be grateful and freely offer some assistance: "Gleda! And not a scratch on her! Happy day! I still can't figure out why you stole her. You left a note explaining it, but half of it was gibberish and the rest had mead spilled on it. Only bit I could make out was "repaying Ysolda in Whiterun," and even that's mostly scribbles. Guess you could try there." If you then question him further about what you said regarding the staff, he will once again explain: "You said a whole lot of nonsense about selling Gleda to hire a priestess for some big event. There was a bit of talk about some staff you had in safe keeping. Never said where, but you sure didn't have it with you!" 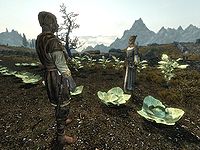 Ennis will often interact with the other residents of Rorikstead, particularly Reldith.

Ennis: "Have you given my idea any more thought? You said you'd let me know yesterday, and that obviously didn't happen."
Reldith: "Oh, I don't know. Yes, we'd make more money, but I don't like the idea of you traveling alone out there with the war and talk of dragons."
Ennis: "Come on now, we discussed that. I wouldn't be traveling all of Skyrim. It'd just to Whiterun and back, that's it."
Reldith: "Tomorrow. I'll let you know tomorrow."

Reldith: "Another fine day at work in the fields. I don't envy those city folk who miss out on the joys of working the land."
Ennis: "I'll tell you who I don't envy - those poor children who lost their parents in this war."
Reldith: "Lives lost, crops burned, land ruined... there's no greater sin than war. And yet, you were an orphan, and you've made something of your life."
Ennis: "I was lucky. If you hadn't rescued me, I'd probably be a thief, a mercenary or something even worse."
Reldith: "It's too fine a day to dwell on such things. Let's get back to work and forget about wars and orphans for awhile."

Reldith: "The way our crops have been growing, Rorikstead must have the richest soil in the hold."
Ennis: "Maybe we should start selling the soil along with the dung. We could make a tidy profit."
Reldith: "Hah! Who in their right mind would pay for dirt? You'd get laughed out of Whiterun for even trying it."
Ennis: "Hey, people have paid money for stranger things. Take our cow dung - we sell that by the wagon load."
Reldith: "When you're rich, you can waste as much money as you like on far-fetched business ideas. In the meantime, there's a farm to run."

Ennis will also discuss his business with Jouane Manette.

Jouane: "The last time I was in Whiterun, the tradesmen were talking about you. It seems your reputation as a businessman is growing."
Ennis: "Glad to hear all my hard work has paid off. Maybe we'll fetch a better price for our crops next time we're in the city."

He will also converse with Rorik occasionally.

Rorik: "I hear your crops sold well at the market. Well done, Ennis."
Ennis: "I'm trying something new, offering discounts for bulk purchases. So far, that seems to be working."

If you ask Reldith where she sells her surplus crops, she'll mention Ennis in her response: "In Whiterun, mostly. Ennis handles the business arrangements, but I know that he has a few purchasers who give us a fair price. Ennis prides himself on his shrewd business schemes. For my part, I'm far happier working with cattle and crops than with people."