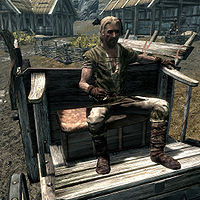 Bjorlam in his carriage outside Whiterun

Bjorlam is a Nord warrior, and the Whiterun carriage driver. He can be found near the Whiterun Stables, and will take you to any of the hold capitals on his carriage, for a fee.

Bjorlam wears a set of farm clothes, a pair of gloves, and a pair of boots. He is equipped with an iron war axe.

You can ask him what he knows about Whiterun, to which he'll reply:

What do you know about Whiterun?
"Well, I know the Companions make their home here. Their mead hall, Jorrvaskr, is the oldest building in the city. Oh, and there's a nasty feud between two families called the Gray-Manes and Battle-Borns. You'll want to be careful there. The rest you can find out by asking the townsfolk. I'd start with the barkeep at the Bannered Mare, or the castle steward."

Apart from this, he shares his dialogue with other carriage drivers.