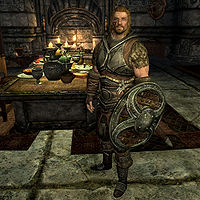 Argis the Bulwark is a Nord warrior living and working at Vlindrel Hall in Markarth. Once you have purchased the home and attained the rank of thane of the Reach by completing quests issued by the jarl, Argis is appointed to be your personal housecarl. As such, he is not accessible until Vlindrel Hall has been purchased.

Argis can be asked to accompany you as a follower, a capacity in which he is rather useful. At level 50, Argis has 100 in Block, Heavy Armor, and One-handed, as well as 98 Archery and 72 Two-handed. He is also a potential candidate for marriage.

This Skyrim-related article is a stub. You can help by expanding it.
Retrieved from "https://en.uesp.net/w/index.php?title=Skyrim:Argis_the_Bulwark&oldid=1614133"
Categories:
Hidden categories: