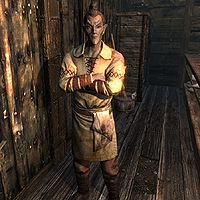 Ambarys Rendar is the Dunmer innkeeper at the New Gnisis Cornerclub in Windhelm. A true supporter of the Empire, Ambarys flies several Imperial banners on the second floor of the Cornerclub, and keeps a set of Imperial armor. He despises the Nord population of the city, a hatred he will frequently vocalize. He runs the cornerclub with the assistance of his employee, Malthyr Elenil, who shares his hatred of the Nords. He traveled to the city as a refugee during the Red Year, but did not realize the hostile reaction the local Nords would have to the Dunmer refugees. He intends to return to Morrowind as soon as he has the money to do so.

Ambarys will work at the cornerclub for all of the hours of the day. He will never sleep or deviate from his work.

Ambarys wears a set of clothes and a pair of shoes. He carries an iron dagger to defend himself. Besides that, he carries a selection of common loot and gold.

Nords visiting the New Gnisis Cornerclub will not get a warm welcome from Ambarys. He will sarcastically say:

"Oh splendid, another Nord."
"Come slumming to the Gray Quarter, have you?"

He will have a much kinder comment for Dunmer customers:

He will also insult the Nord population at large with the claim that:

"It's not the cold of Skyrim that gets to me. It's the stink from the people."

Ambarys might also vocalize his plans to leave Windhelm behind him for his homeland:

"When I've made enough money, I'm going to return to Morrowind in high style."

He will make remarks relating to the Civil War about whoever controls Windhelm. While Ulfric Stormcloak holds the city, he will say:

"Things have been a lot worse around here since Ulfric took over."

If the Imperial Legion defeats the Stormcloaks and seize Windhelm he will instead have a much cheerier outlook on the situation:

"At long last, Windhelm is free. No longer must we suffer persecution at the hands of Ulfric Stormcloak."

When asked for rumors, he may point you to Aventus Aretino.

Heard any rumors lately?
"I was walking by the old Aretino Residence, heard the little boy, Aventus? He was chanting. It was the Black Sacrament, I tell ya."

He will also give his personal view about magic, should he be asked about it:

Where can I learn more about magic?
"The College of Winterhold is the only place in Skyrim open-minded enough to teach magic.
Although Ulfric's court wizard has been known to take on apprentices once in a while."

When ending a conversation with Ambarys, he will tell you to talk to him again if you require a drink:

"If you need another drink, I'll be right here."

He will also invite you to spend some time at the bar with the remark:

"Have a seat, there should be plenty of space."

During Blood on the Ice he might make a remark about how he does not care for the women who have died:

"Apparently some Nord women were murdered. Not sure why I should care."
There have been murders in Windhelm?
"None of that matters to me. Until someone takes a Dunmer, I let Windhelm deal with its own problems."

You can also ask him about how the Dunmer are treated in Windhelm.

How are the dark elves treated in Windhelm?
"Well you see where we have to live. This forgotten alley. All the filth from the upper quarters flows downhill, like they say.
Good luck getting one of the guards to help with anything.
I tried to get Ulfric to even come down here to see the squalor, but the High Lord of His Mightiness couldn't find the time."
Why are there so many dark elves here?
"Where else would we be?
When the Red Mountain burned, you could scarcely breathe in Morrowind. So we came west.
Windhelm is the first city on that road, and here we are. If we had known the Nords would be so unwelcoming, we may have kept walking."

One of Suvaris Atheron's brothers, Aval Atheron, will mention that he respects Ambarys. When you ask Malthyr Elenil why he does not return to Morrowind, he will say that Ambarys is one of a few reasons that he stays. 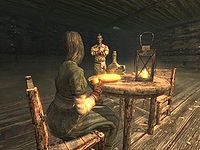 Ambarys Rendar: "What's new with the Cruel-Seas [sic], Suvaris? Have they given you one of those helmets with the horns on them yet?"
Suvaris Atheron: "What do you want from me? I work for them ok? We're not friends. They pay me, and I get the job done. That's it."
Ambarys Rendar: "Touchy. Maybe some Dunmer lives in you yet."
Suvaris Atheron: "Either pour another drink or keep moving, Ambarys."

Ambarys will also ask Suvaris if she finds it belittling working for a Nord family:

Ambarys Rendar: "Don't you ever find it demeaning, working for that Nord family?"
Suvaris Atheron: "Look, Ambarys, I just came here for a drink. I don't need any trouble."
Ambarys Rendar: "Fine, then. I guess some Dunmer are content to be their pets."
Suvaris Atheron: "Here's what's going to happen. I'm going to pretend I didn't hear that, and you're going to leave me alone. Deal?"

Scouts-Many-Marshes was originally supposed to visit the cornerclub, but his schedule never has him go there. While there, he could have held two conversations with Ambarys. One in which Scouts-Many-Marshes asks Ambarys about his opinion on the Nords:

And another where Ambarys asks how much he is paid: