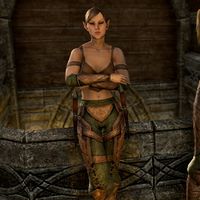 Venomous Fauridil is a Bosmer who can be found in the Salted Wings Tavern in Vulkhel Guard. She is a member of the Undaunted and can be bought a drink for the This One's On Me achievement.

You will meet her again at the Undaunted Enclave in Elden Root where she will, where she will ask you to buy her another drink. She will also tell you about Elden Hollow, which will add the location to your map if you haven't discovered it already.

When you are first recruited into the Undaunted, Fauridil will greet you dismissively.

]
"Excellent. I'll have this gold turned to a blurry haze soon enough.
You aren't half-bad, fresh-meat. You know to keep the talent happy."

This is counted for Fauridil is standing next to Tiny Talisse, and you can also observe that they seem to be wearing the same outfit:

Why are you and Tiny Talisse dressed the same way?
"Ah, Talisse and I have a storied history. They call us the twins, but I was an Undaunted first. She was rather taken by my methods—effective as they are. So she imitated me.
I wasn't put off—much—highest form of flattery and all that, right?"
Who's better?
"She's bigger—slightly more buffoonish, if you ask me—but I'm better. I've saved her life more times than she's saved mine, at any rate."

She will join in with the welcome once you are initiated into the Undaunted.

While in Grahtwood, you can find Fauridil hanging out around the Undaunted Enclave:

What are you doing out in Grahtwood?
"I was just passing through between adventures. I'd say it was the delicious drink that gave me cause to stay, but that'd be a lie. This swill is disgusting.
Being drunk stopped me. I hate this place, but I know where the watering holes are."

How about a drink?
"Sure. I suppose I could use another to wash down the last. It's all brown and flavorless around here anyway.
Just hand me some gold. Get it myself."

Gold]
"By the Green Pact, we Bosmer make horrible drinks.
At least they get you drunk."

Know of any places an Undaunted would want to see?
"You'll find the Elden Hollow just beneath us—an ancient graveyard for centaurs and minotaurs.
And—listen to this—a Dominion Canonreeve was recently seen there, with a full contingent of Justiciars! None can say why."

This Online-related article is a stub. You can help by expanding it.
Retrieved from "https://en.uesp.net/w/index.php?title=Online:Venomous_Fauridil&oldid=2007826"
Categories:
Hidden categories: