The UESPWiki – Your source for The Elder Scrolls since 1995
< Online: Places: Rivenspire / Guildhalls
Jump to: navigation, search 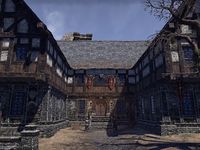 This Fighters Guild is the Shornhelm branch of the Fighters Guild. It is located in the eastern part of the Lower City. The Guild shares the building with the Fighting Edge, although they have separate entrances. The right-hand side of the building and the basement belong to the Guild. The Guildmaster's office is immediately on the right from the Guild's entrance. The stairs leading to the upper floor are blocked by crates. In the basement, behind the stairs is the resting area with several bunk beds and trunks. Right across from it is the armsman's stall. This part of the guildhall is equipped with two training dummies and an archery target. Freely available leveled weapons and pieces of armor can be found on or near the weapon stands and in the armsman's corner.

This guildhall is nicely decorated with plants, rugs, curtains and paintings. There are several cabinets, wardrobes and desks around the building along with some barrels and crates. There is a map of Cyrodiil on the wall. Most of the residents can be found in the basement either training or resting. Several Shornhelm Guards are patrolling and guarding the building inside and outside.

*This person can be found here only during the related quest.

This Online-related article is a stub. You can help by expanding it.
Retrieved from "https://en.uesp.net/w/index.php?title=Online:Fighters_Guild_(Shornhelm)&oldid=2135176"
Categories:
Hidden categories: