Crucible Enforcers are Nord foot soldiers who can be found in the Blessed Crucible. They show up during the quest after Talres Voren tries to get you to cheat. 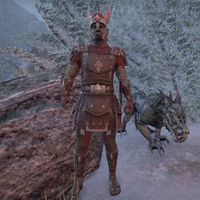 This Orc Enforcer guards the front gate and sics four Crucible Durzogs on you. 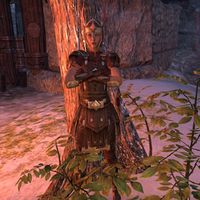 This Breton Enforcer guards the front gate alongside her Orc comrade.

The friendly Orc enforcer at the entrance greets you along with his partner. While not on the quest:

While on the related quest, Talres will speak to the Orc enforcer.

Talres Voren: "Ahh, it's good to be back! Guards, would you be so kind as to open the gates? I bring fresh fighters for the games!"
Crucible Enforcer (Orc): "You ain't allowed in here, Talres. You know that."
Talres Voren: "I brought you some new competitors! Surely, you can make an exception. Now, be a good lad and open the gates?"
Crucible Enforcer (Orc): "I'll be the judge of it! Let's see if they've got the right stuff. Durzogs, attack!"

When you've killed the Durzogs, the Orc opens the gate.

The Nord enforcers that appear after battle against the Pack will be cross with you.

Crucible Guardian (Nord): "We don't abide cheaters in the Blessed Crucible! You're gonna pay for that!"

From then on, all Enforcers will be hostile.

This Online-related article is a stub. You can help by expanding it.
Retrieved from "https://en.uesp.net/w/index.php?title=Online:Crucible_Enforcer&oldid=2231756"
Categories:
Hidden categories: