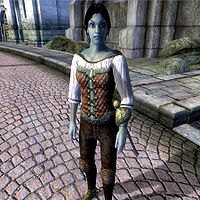 First Mate Malvulis, a Dunmer pirate, is part of the crew aboard the Marie Elena, a vessel docked in the Imperial City's Waterfront District. Malvulis is very protective of her vessel, and possesses a pretty short temper—she will attack anybody who steps on board without her permission.

She can be found hanging around the docks at the Waterfront District with other members of the Marie Elena's crew, near the vessel. Regardless of weather, she will do so for twenty-four hours a day, occasionally singing an old sea shanty about Cyrus the Redguard: "There once was hardy [sic] young lad of the sea... A Redguard of courage and honor was he... Sail on, my Cyrus, sail on..."

She is armed with a steel cutlass and wears a set of typical lower class clothing, a pair of buckled shoes, a quilted doublet, and a pair of leather greaves.

At first glance, she appears to be peaceful, but when you talk to her, or if you spend a bit too much time near the vessel, you will soon realize something is wrong: "Beautiful, isn't she? The Marie Elena. Damn fine ship, with a damn fine crew. I should know, I'm her first mate. Malvulis is the name. So believe me when I tell you we don't like it when people snoop around in our affairs. You get near that ship, and my men will run you through." When you try to talk to her once again she will be even more threatening: "I hope I made myself clear the first time. If you get near that ship, you'll end up dead. Now get out of my face."