The UESPWiki – Your source for The Elder Scrolls since 1995
< Morrowind: People / Trainers
Jump to: navigation, search 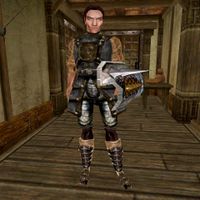 Vinnus Laecinnius is an Imperial pilgrim located in the Six Fishes tavern in Ebonheart.

When asked about latest rumors, he says: "Have you heard of the Talos Cult? A secret group within the Legion. What's that about? Are they planning something?"