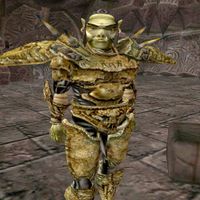 Ra'Gruzgob is an Orc warlock who thinks he is a Khajiit. He is having a party with his fellow Sheogorath worshippers in the Antechamber of Ald Daedroth. For a gift of moon sugar, he will tell you a little secret.

He is wearing a Armun-An Bonemold cuirass with matching pauldrons and bonemold bracers with matching greaves and boots. He is also wearing a common shirt with matching pants and a Crimson Despair Amulet. He is also carrying a Devil Tanto. Like all Orcs, he has a natural resistance to magicka, and can boost his health, fatigue and attack for short periods, at the cost of agility. Aside from that, he knows the following spells: Dire Weary, Strong Frost Shield, Second Barrier, Strong Shock Shield, Exhausting Touch, Ordeal of St. Olms, Gash Spirit, Shadowmask, Absorb Fatigue, Energy Leech, Drain Blood, Shield of the Armiger, Daedric Health, Frost Storm, and Toxic Cloud.