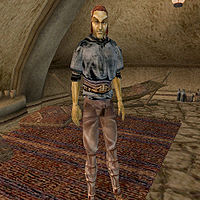 Ilmiril is an Altmer acrobat living in Ald'ruhn. He can be found inside his house on the east side of town near the temple. You can ask him for a donation for the Buckmoth fund, but he will not give anything.

In Sottilde's Code Book, someone called "ILL MIR" is reported as having received four boxes of skooma, so he may be involved with the Camonna Tong. He also has some raw ebony in a chest in his house, giving further proof that he may be a smuggler.

He wears a common shirt along with matching pants and shoes. Aside from his natural weaknesses to fire, frost, shock and magicka, his natural bonus to magicka, and resistance to disease, he knows no spells.

He also possesses a copy of a mysterious Small Key. Lirielle Stoine also has a copy, as well as three unused NPCs: Dalos Golathyn, Fomesa Tharys and Llandreri Selothan. The key leads nowhere, and may have been meant for an unfinished quest.