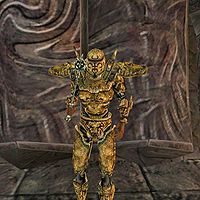 Domba is a Redguard witch. She can be found in the Right Wing of the shrine at Ald Daedroth. She and her partner Gnaw Tooth might be found fighting elite ordinators.

She is wearing a Native Armun-An bonemold helm, an Armun-An bonemold cuirass with matching pauldrons, bonemold bracers with matching greaves and boots, a common shirt with matching shoes, the Belt of Sanguine Smiting, and a Crimson Despair Amulet. She is wielding a Demon Mace. Like all Redguards, she has a natural resistance to poison and disease, and can boost her health, strength, agility and endurance for a short period of time. Aside from that, she knows the following spells: Dire Weary, Strong Fire Shield, Strong Frost Shield, Second Barrier, Strong Shock Shield, Summon Bonelord, Summon Clannfear, Summon Dremora, Shadowmask, Strong Reflect, Strong Spelldrinker, Wild Spelldrinker, Summon Flame Atronach, Summon Frost Atronach, and Summon Hunger.

Note that she and Gnaw Tooth will immediately engage the two Witchhunters who are also in the Right Wing, and who will almost certainly kill them quickly. Make sure to loot both of their bodies for their Sanguine items before they despawn, or you will be unable to complete the Threads of the Webspinner quest.