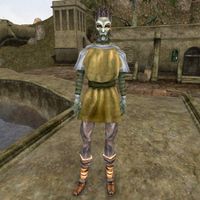 Balyn Omavel is a Dunmer assassin. He is a member of the Morag Tong living on the east side of Balmora. Balyn is found roaming the waterfront on either side of the Odai River.

Rumor has it he has been working outside of the guild, and must be punished.

Balyn's last name is misspelled "Omarel" on his house (see quest notes). The Illusion skill book Incident in Necrom can be found on his bed.

He wears a common shirt, pants, and shoes. He carries up to 50 gold. In combat, Balyn relies on a dire flameblade. Aside from his natural resistance to fire and the sanctuary provided by his ancestors, he knows no spells.

If you are caught sneaking in his house during Mephala's Quest:

"What are you doing? Get out of there! Who sent you here? Get away!!!"