The UESPWiki – Your source for The Elder Scrolls since 1995
< Lore: Places: E
Jump to: navigation, search 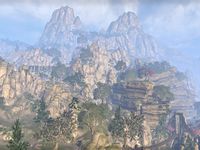 Eton Nir is the tallest mountain found in the province of the Summerset Isles, within the Summerset Isle.[1] Eton Nir consists of an abundance of ruins, as well as, expansive tunnel systems that connect each side of the coast. The city-state of Cloudrest is found on the highest alps of Eton Nir.[2] The Eton Nir Grotto is one of the many underground caverns that are found across the massif.

The high slopes also contain a breed of Gryphon known as the Azure Gryphon, which has a distinct blue tint on their feathers, which is attributed as either their natural camouflage, or a gift from the Divines.[3] Further up, in the peaks of Eton Nir lies the Snowcap Gryphon, which are pale snow white, and live in the clouds of Eton Nir. They were considered a myth for most of the First Era.[4] Gryphons are commonly used by the Altmer of Eton Nir. The Welkynars, a knightly order of Cloudrest and Eton Nir, are known to use Gryphons.[5]

There are dark rumors across the province that say that Eton Nir contains many treasures,[6] as well as, hidden ruins of both the Aldmer, and even the Sload.[1] A Temple dedicated to Meridia is found deep in the Eton Nir Grotto. The cave systems, Karnwasten and King's Haven Pass go through Eton Nir and are used as alternate paths from the main road. The former is known to be used by smugglers and pirates that bring contraband into Summerset Isle. The Crystal Tower is found near the center of the mountain massif.